Only one Bulldog was built, but this Aston hypercar still has the power to shock 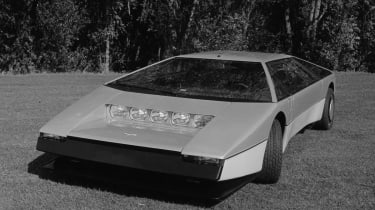 In the light of everything that’s happened since 1979, perhaps the Bulldog wasn’t such a daft idea after all. Aston’s Veyron. Designed by setsquare-loving William Towns soon after finishing the equally angular AM Lagonda, the Bulldog was, arguably, the world’s first ‘hypercar’.

It was huge but low (just 43 inches road-to-roof), it had powered gullwing doors, digital instruments and – way ahead of its time, this – a reversing TV camera. No one really cared about that, though. The Bulldog’s greater act of prescience was that cars would one day have monstrous power outputs and top speeds higher than those of light aircraft.

The initial engineering work was carried out by AML chief engineer Mike Loasby; the codename for the project was DP K9, after the robot dog in the Doctor Who television show. When Loasby went to work for DeLorean in 1979, Keith Martin spent the next three years finishing the project and carrying out the initial testing, including high-speed laps of MIRA.

Bulldog’s Bosch-injected twin-turbocharged version of the classic 5.3-litre Aston Martin V8 was reputed to have hit over 700bhp on the test bench but this was wound down to a claimed 600bhp once installed.

Although a cosy two-seater, everything about the car was XXL, including the Pirelli P7-shod Compomotive split-rim alloys which boasted a 345/35-sized footprint at the back. Claimed top speed was a, back then, completely absurd 237mph. Whether that was in any way realistic we’ll never know as the best it every managed at MIRA (far from ideal) was 192mph.

Twenty-five Bulldogs were planned but only one, a left-hooker, was ever made – after the car had been unveiled to the press at Aston Clinton, it was sold for a reputed £130,000. Last year the Bulldog emerged again for sale at $1,300,000.