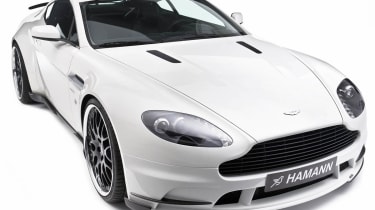 Hamann has taken its tuning hands to the Aston Martin V8 Vantage, changing its appearance and giving a small boost to performance.

First up, there are a number of components added to the bodywork including a front-lip spoiler, side skirts, a rear wing and a three-part rear diffuser. Hamann will produce the kit in either fibreglass or matt carbon, allowing differing looks to set the AMV8 apart.

There's a set of 21in alloys available, which go hand-in-hand with lowered suspension (30mm at the front and 20mm at the rear) to enhance the car's dynamics as well as giving it a sharper, more hunkered-down look.

At the back of the Vantage, there's a stainless steel exhaust system that boosts the Aston's bellow as well as providing an extra 20bhp, while there's a fettled interior to complete the host of enhancements. No word on prices apart from those alloys, which will set you back €8540 - or around £6750.