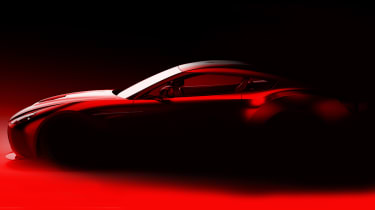 Aston Martin and Zagato are making a new car. Due to be revealed at the Villa d’Este Concours on the 21st May, it will then make its racing debut at the fourth round of the VLN series at the Nurburgring on the 28th May, in preparation for the Ring 24 hour race in June. The driver line-up hasn’t been revealed.  The only picture released so far heavily suggests it is V8 or V12 Vantage based. A production car hasn’t been confirmed, though its reception on the shores of Lake Como may change that.  Aston Martin’s collaborations with Zagato after the DB4GT - the V8 Vantage and DB7-based cars - were pure road cars and were never raced by the factory, so this marks an exciting turnaround.  The DB4GT Zagato wasn’t hugely successful, consistently outpaced by Ferrari’s 250 SWB and 250 GTO. Only 19 were made and despite a lack of pace in its period, its beauty and ability as a dual-purpose road-racer make it hugely desirable today. Design director Marek Reichman is excited about the project. ‘Working with Zagato again in 2011 is inspirational for the team – certainly DB4GT Zagato is one of my favourite ever designs as it is with many of the designers in our studio. We can create a truly modern Aston Martin interpretation which stays true to the historical routes of the relationship with Zagato.’