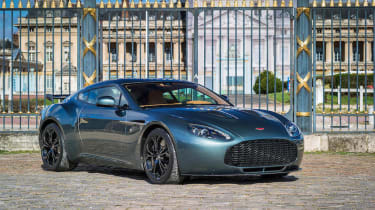 Bonhams has gathered over 50 lots for its Monaco sale dubbed the ‘Big brands of Monaco’ which will commence on 11 May. As the name suggests, some seriously expensive metal will go under the hammer – befitting of the Monte Carlo setting – including an Aston Martin V12 Zagato Coupe, just one of 61, valued north of £500k according to the estimate.

Aston Martin commissioned 150 V12 Zagato Coupes, however fewer than half made production, only adding to the Zagato-influenced model’s exclusive nature. Therefore, values have appreciated significantly since the car was announced in 2012; priced at £330k on release (plus local taxes) this little-used example is reckoned to be worth between £480,000 and £660,000.

Bearing the Z motif, inside and out, indicates the design influence of the Italian coachbuilder on the V12 Vantage-derived model. To create the quintessential Zagato aesthetic, it’s reclad in bespoke bodywork crafted from aluminium and carbonfibre – saving around 100kg – comprising a new fascia and totally redesigned rear end that features the Zagato hallmark of rounded rear lights.

Zagato’s influence stopped short of the mechanicals; under the skin the Zagato Coupe retains the running gear from the standard V12 Vantage. As such, the naturally aspirated 5.9-litre V12, developing 510bhp and 420lb ft of torque, is good for 0-62mph in 4.2sec and a 190mph top speed, and to reign in the performance carbon-ceramic brakes were fitted all round.

While the Aston Zagato is our pick of the bunch there’s plenty else that will have bidders weak at the knees. A 1984 Jaguar XJS V12 Lynx Eventer, rivalling the Aston for exclusivity, is a unique and practical take on the GT, which bears an estimate between £66,000 and £83,000. Continuing the British-built theme is Ayrton Senna’s 1993 Monaco GP-winning MP4/8A F1 car liveried in the famous red and white Marlboro colour scheme.