Audi unveils the A1 Clubsport quattro, a 500bhp hot hatchback that's quicker than an R8 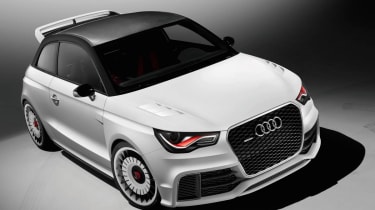 The hottest Audi A1 yet has been revealed. And the Clubsport quattro is quicker and more powerful than a V8-engined R8, too.  The 2.5-litre five-cylinder turbo petrol engine from the Audi RS3 and TT RS has been shoehorned into the front of the A1, with the wick turned up considerably. 335bhp becomes 496bhp while torque climbs from 332lb to 487lb ft. With maximum power available between 2500 and 5300rpm, pace should be monstrous. With that power sent to all four wheels, the 1.3-ton A1 Clubsport hits 62mph in 3.7sec and 124mph in 10.9sec. As with most German performance cars, the top speed is limited to 155mph. Further good news for keen drivers is the fitment of a six-speed manual gearbox, too, rather than the seven-speed twin-clutch transmission which is the sole option on an RS3. Not that such a thing matters, as the Audi A1 Clubsport quattro is sadly (but predictably) a one-off, shown at the VW Group Wortherseetour 2011, where the new Volkswagen Golf GTI 35 has also been displayed. Some of the Clubsport’s styling flourishes will make it the Audi options list, apparently, while the car serves as another teaser for the S1 quattro.

The four-wheel-drive hot hatchback is set to get a four-cylinder engine boasting over 200bhp, with either a 2-litre turbo or twin-charged 1.4-litre expected. Our appetite for something altogether more potent has certainly been whetted, though… Click here to read about the 182bhp Audi A1 TFSI Click here for our review of the Audi A1 TFSI sport Audi RS3 meets Ferrari Enzo on video...