Audi has announced a four-wheel drive version of the A1 supermini, powered by a 253bhp 2-litre turbocharged petrol engine. 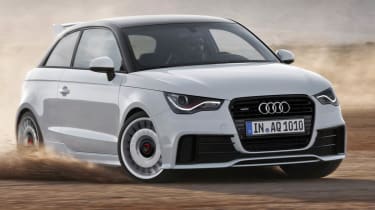 Audi has announced a four-wheel drive version of the A1 supermini, powered by a 253bhp 2-litre turbocharged petrol engine.

The limited-edition A1 Quattro shares the 2-litre TSI turbocharged petrol engine of the existing Audi S3, which is claimed to be capable of blasting the supermini from 0-62mph in 5.7 seconds, on its way to a 152mph top speed. Drive is delivered via a six-speed manual gearbox instead of a twin-clutch.

But don’t get too excited – the A1 Quattro will only be available in left-hand drive, with production limited to 333 cars for worldwide sale. Deliveries will start in the second half of 2012 and Audi UK hasn’t confirmed wehther the car will come here, saying the decision on whether to import the car will ‘depend on customer reaction.’

It’s definitely the toughest-looking A1 so far, with a chunky bodykit and a substantial rear wing. Only one colour will be available: ‘glacier white’ metallic, with the A1 also getting a high-gloss black roof and a very 'eighties style black 'slam panel' at the rear. There are also unique 18-inch alloy wheels. It also has tinted LED rear lights, 100mm diameter polished exhaust tailpipes.

Pricing hasn’t been announced, but you can bet that the A1 Quattro’s position at the top of the range will be reflected in the asking – if it does come to the UK then don’t reckon on getting much change from £30,000.