Audi’s successful A1 has been totally reimagined inside and out, and there is another S1 on the way, too 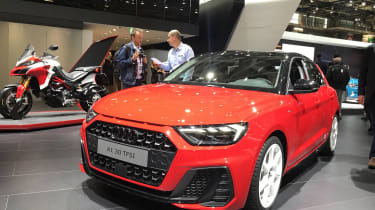 Audi has lifted the veil from one of its most important new models of the year at the 2018 Paris motor show.

The supermini-sized Audi A1 has become the marque’s third biggest seller in Europe, making the new supermini a crucial new car for Audi. It follows a hectic six months of new Audis, but this is the first time in a while the German marque has replaced one of its compact models, giving us an eye on what to expect in future.

This time around the A1 will be available only in five-door form, in the process losing the contrasting, hooped roofline that formed the previous car’s aesthetic trademark. The new model is not lacking in visual drama, however, taking design cues from a combination of the Q2 SUV and larger models in the Audi range, but adding a youthful spin. Customers will still be able to specify a contrasting colour for the roof, but the new car’s thick C-pillar remains body coloured for maximum visual drama.

> Click here for our look at 2018's most exciting new cars

The S-Line model shown in Paris is particularly striking, not least for its red and white colour combination for the bodywork and wheels, referencing the old Ur-Quattro. Also inspired by the road-going version of the dominant rally-winner is the triple slip vent sat above the usual single frame grille, while the large fake intakes on either side add even more visual aggression. 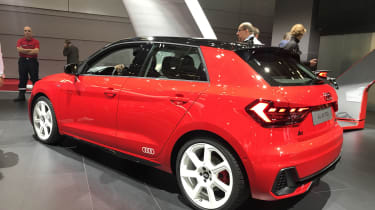 Audi’s increasingly diverse design language looks to be exemplified by the smaller models in the range, with both the A1 and the Q2 crossover featuring more playful detailing (and brighter colour options) than their stately saloon siblings.

The A1’s new lighting signatures front and rear are expected to find their way onto other new small Audi models, too, with the new Q3 SUV, due to be revealed in the next month or so, also likely to feature the graphic-heavy look.

Sharing its underpinnings with the Volkswagen Polo and SEAT Ibiza, the new A1 will launch with a range of turbocharged three- and four-cylinder petrol engines, of 1-litre, 1.5 and 2-litre capacities. The two larger options are both four-cylinder units, with the top 2-litre version producing a warm hatch-like 197bhp, while the 1-litre car is a turbocharged three-pot. All cars except the flagship model will be connected to a six-speed manual as standard, a seven-speed S-tronic dual-clutch ’box is available as an option. 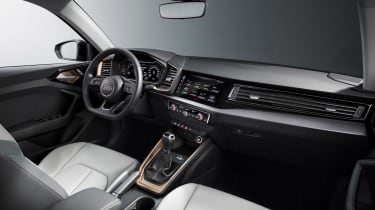 A side-effect of being based on the Volkswagen Group’s MQB-A0 platform is that Quattro all-wheel drive will not be available on the standard A1, although reports of a 250bhp successor to the outgoing S1 will likely buck that trend in offering an all-wheel drive system eventually. This will be facilitated by a new independent rear suspension, required as a result of the all-wheel drive car’s rear driveshafts. Standard A1s will make do with a simple, compact torsion beam.

It’s not only the exterior that has been reimagined, either, as the A1 introduces a new interior incorporating a new infotainment system derived from the new MMI Touch pro system from larger Audi models. The new, driver-focused dash layout is simplified, and comes as standard with a 10.25-inch digital driver’s display. The centre display will be available in two sizes, 8.8- or 10.1-inch, but in either size it seamlessly integrates into the dash.

When the original A1 was launched back in 2009, its solid build quality and cheeky design impressed, but the car’s dull dynamics where accentuated when compared to the contemporary Mini. Audi is hoping that this new model addresses the criticisms levelled at its predecessor, while maintaining its edge in build quality, tech and, crucially, desirability.