New Audi A5 and S5 news and pictures

Audi unveils updated versions of its A5 and S5 coupe, cabriolet and Sportback. News and pictures here 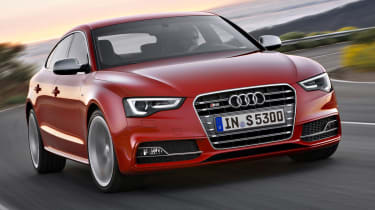 Four years after launch, an updated Audi A5 will go on sale in December. The revised engine range includes new units, all of which feature forced-induction and direct-injection. The front end has been facelifted with two pinched swage lines on the bonnet running back from the edges of the trademark grille. The lights have been redesigned, now with LEDs at the rear, and new wheel designs are available.  The entry-level petrol engine is a revised version of the 1.8 TFSI turbocharged unit, with 168bhp and 236lb ft of torque. The 208bhp 2-litre TFSI turbo remains the same. New to the A5 line-up is the 3.0-litre, supercharged TFSI V6, which puts out 268bhp.  The S5 Coupe’s 4.2-litre V8 has been superseded by a higher-tune version of the V6, putting out 328bhp. It shares this engine with the S4 and S5 Cabriolet and Sportback. On average it is claimed to consume 20% less than the outgoing V8, with a combined 35mpg. 0-60 mph drops to 4.9 seconds. As before, the S5 will be four-wheel drive, with a choice of six-speed manual or seven-speed twin-clutch S-Tronic transmissions. Diesel options start with a 175bhp 2-litre four-cylinder unit, which returns 60mpg and 122g/km. There are three V6 diesels. The first variant of the 3-litre TDI, with 201bhp, is claimed to be the most fuel-efficient six-cylinder unit in its class. It boasts 57.6mpg and 129g/km. Next up is the 241bhp version of the motor. The cleanest diesel in the range is yet to come. It will be the first in its class to meet the Euro 6 diesel standard. UK prices have yet to be confirmed, but with price rises of around €200 on the Continent, expect very slight increases here. That means prices between £25,500 and £44.000.