Audi has updated the fast RS7 model, to bring it into line with the rest of the A7 Sportback range. Details and images here 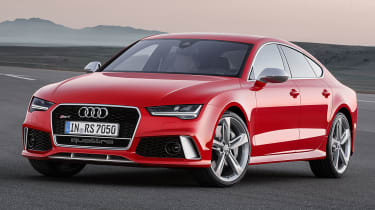 Audi recently facelifted the standard A7 Sportback range, and it has now announced a similar update to the full-on RS7 model. The bulk of the changes are subtle cosmetic tweaks, designed to freshen the model up.

Up front, the big change revolves around the implementation of the company’s latest optional matrix LED headlights – first seen in the big A8. The standard models also come with less advanced LED arrangement. The front bumper has also been reprofiled, with a slightly slimmer front grille, and different air intakes.

At the rear, the taillights have a new design, with a slightly darker appearance. The company has also added more colour options to the model, as well as different carbon and brushed aluminium trim packages. The standard-fit 20-inch alloy wheels have also been re-styled.

Audi hasn’t touched the twin-turbo V8 powerplant, which produces 552bhp and 516lb ft of torque as standard, which matches the RS6 Avant exactly. This pushes the luxury four-door coupe to 62mph in 3.9sec, and onto a top speed of 189mph if the Dynamic Plus package is selected.

The refreshed model is expected to go on sale towards the end of 2014, with prices remaining at around the same £83,515.