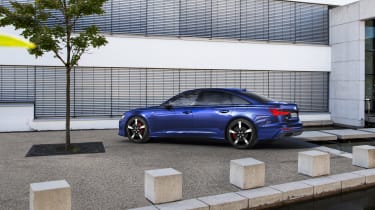 Audi has unveiled the new A6 55 TFSI e quattro, sitting alongside the A7, A8, Q5 and Q7 TFSI e variants with the same plug-in hybrid powertrain. The model will no doubt be very popular with company car drivers, offering decent performance and on-paper economy along with low company car tax rates thanks to its low CO2 output. Pricing will sit at around the £60,000 mark, with first deliveries beginning in early 2020.

At its heart is the familiar 2-litre, four-cylinder turbocharged unit, which delivers 249bhp and 273lb ft of torque in this application and is backed up by an 105kW (141bhp) electric motor that also delivers 258lb ft maximum torque. However, the combined system output is pegged at 362bhp and 369lb ft, still good enough for a 5.6sec 0-62mph time and a top speed limited to 155mph.

The electrical system gives the A6 an emissions-free range on the WLTP cycle of up to 32.9 miles, and as with most PHEVs, the TFSI 55 e quattro has several driving modes, with the default one being EV mode where it will drive as an EV until either the battery is depleted or the driver engages the ICE by pressing past a certain point on the accelerator’s travel. There’s also a Battery Hold mode and a Hybrid mode, the latter working in conjunction with the car’s satnav system to decide the best time to deploy its electrical energy in the most efficient manner.

A variety of charging options will be available but Audi says that on a domestic three-pin plug the batteries will take seven hours to fully recharge, and two-and-a-half hours on a 400V/16amp set-up. 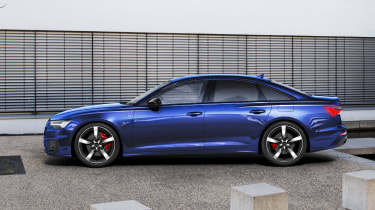 With quattro all-wheel drive fitted as standard, Audi says the models are the only offerings from a premium manufacturer with the combination of all-wheel drive and plug-in hybrid tech. There’s no word on how much additional weight the PHEV system adds, but it still talks of the 55 TFSI e quattro as providing dynamic performance. As such, it’s equipped the PHEV with S Line styling and a black styling package to enhance that sporting look.

UK pricing is yet to be announced, but expect it to set you back around £60,000. First deliveries will begin in early 2020.