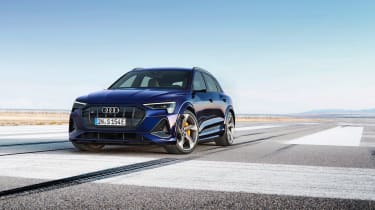 High-performance Audi diehards turn away now, because the Audi e-tron has just been revealed with an S badge attached to its nose, signifying it as being a new high-performance flagship. Like its lesser sibling, the e-tron S is a large electric SUV that tips the scales at way over 2.5 tons, but while the standard car makes do with two electric motors, the new e-tron S has three, plus a swathe of tech designed to hide its considerable bulk in the corners.

The layout of these motors is relatively simple, with one motor mounted on the front axle and two more, slightly smaller units mounted on the rear. The motors themselves are a wholesale application from the current e-tron 55 model, but here swapped around so the larger unit sits on the front. Together, the additional motor gives the e-tron S a peak power figure of 496bhp equivalent (or 370kW), with a total combined torque figure of 717lb ft – gains of 94bhp and 227lb ft respectively. These figures, as is so often the case on electric cars, are only available for limited ‘boost’ periods, in the case of this e-tron S being eight-second blocks of full throttle. Despite the big power numbers, the high weight figure also keeps acceleration relatively mundane when compared to the fastest Teslas and Taycans, hitting 62mph in 4.5sec, and topping out at 130mph. 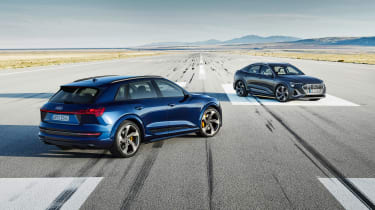 Another advantage of having two rear-mounted motors is the ability to more finely apportion torque between the two wheels without losses from differentials or driveshafts as they directly drive each rear wheel. This not only increases the torque vectoring effect, but also gives far more instantaneous control under all circumstances, be that acceleration, cornering or ESC intervention. Under normal circumstances, the e-tron S is also only rear-wheel drive, with the front drive unit only being implemented when required, improving its efficiency at low loads.

The e-tron’s battery pack itself is unchanged from that of the standard model, with a 95kWh gross capacity, which gives the e-tron S a 223-mile range (slipperier Sportback models achieve 226 miles) on the WLTP cycle. Standard models have a slightly lower 215-mile range, something explained by the continual improvements in electric motor efficiency. 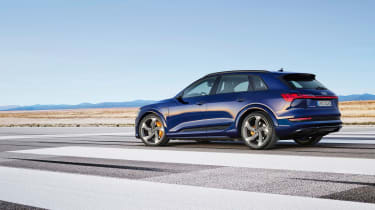 The standard e-tron already hits the scales at 2565kg so we suspect that this model, given its extra hardware, will weigh even more. To help keep that bulk under control, Audi has fitted larger six-piston front brake calipers on larger discs, up to 22-inch wheels (21s are standard), a new progressive steering rack and a completely recalibrated air suspension system. Depending on the driver mode selected, the air suspension is able to vary the ride height by up to 76mm, aided by the standard-fit adaptive dampers.

The e-tron S otherwise takes the standard S-line model design elements in combination with some clever new aero devices around the front wheels and some active brake cooling ducts that only open when required to aid aero at high speeds. Other specification highlights include Audi’s new digital matrix LED headlights which first debuted on the e-tron Sportback, which essentially transform the Audi’s headlights into a projection system that’s able to more finely adjust the beam ahead based on the surroundings. Consider standard matrix beams to be a simple dot matrix screen, then these headlights are more like HD, with barely discernible ‘pixels’, if you will. 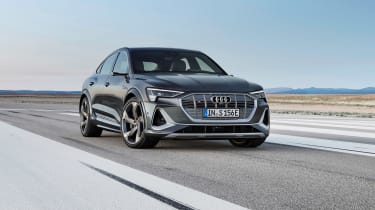 The e-tron S will be available to order this summer, with UK prices starting at £87,000 for the standard estate and £88,700 for the Sportback versions, with deliveries arriving later in the year. Although this is the first all-electric high-performance Audi model, we can bet it’s certainly not going to be the last. 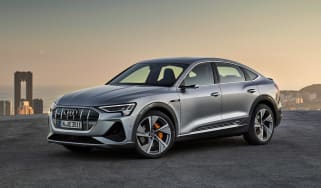