Audi has launched the SQ5 TDI, a 3.0-litre, 309bhp rival to the X3 xDrive35d, and the first S model to be fitted with a diesel engine 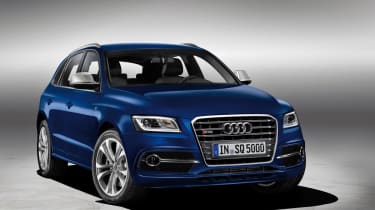 Just hours before the company’s latest TDI-driven Le Mans 24 Hour victory, Audi announced that the next S model, the SQ5 will be powered by a 3.0-litre bi-turbo diesel V6 engine – a first for any S model.

Using the same engine as the A6 3.0-litre TDI, and like all high-performance Audis, the SQ5 comes with the all-wheel-drive Quattro system, coupled to an eight-speed tiptronic transmission as standard. The new model will be priced from £45,000, with orders starting in the UK from October. It will be a direct rival to the tri-turbo BMW X3 xDrive35d, which offers a similar amount of performance from a diesel engine.

With 309bhp and 480lb ft of torque, Audi claims that the SQ5 TDI will do 0-62mph in 5.1 seconds, and hit an electronically-limited 155mph top speed – while still managing a combined 39mpg. Because of the SQ5’s high-performance intent, Audi has installed a sound actuator in the exhaust system, which should give the SQ5 a deep, almost V8-like soundtrack.