Audi has confirmed that it is working on a smaller compact crossover, that will be called the Q1. Details here 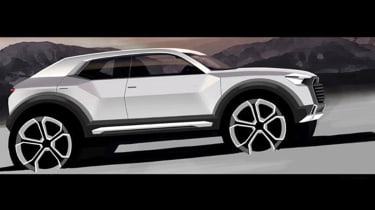 Audi has released the first details and image of its smallest crossover yet, the Q1. Although still in the first stages of development, CEO Rupert Stadler has confirmed that the 2016 Audi Q1 ‘is a key component of our growth strategy’.

The news comes with the confirmation that the new model will be produced at the company’s Ingolstadt plant in Germany from 2016. Although few details have been released, the Audi Q1 will round-off the bottom end of Audi’s four-wheel drive and crossover series of ‘Q’ cars, sitting below the Q3, Q5 and Q7.

It is thought that the Q1 will use the Volkswagen Group MQB platform, which will be shared with the A3, Volkswagen Golf and Seat Leon among others. This will unlock a range of well-proven engines, and Haldex-type four-wheel drive system, although it will be offered with front-wheel drive too, just like the current Q3.

Audi’s growth strategy currently revolves around the success of its SUV and crossover Q models, which currently account for a total of 28 per cant of all Audi sales. By 2020, the company is envisaging that this figure will rise to 35 per cent.