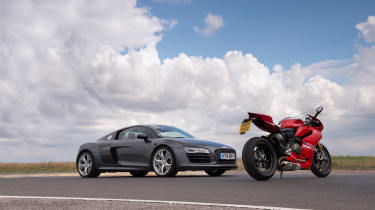 Two super quick machines piloted by two world champions: this track battle is set to be a real corker. And it’s personal, because it features Dickie Meaden’s own Audi R8 V10 Plus Fast Fleet long termer, equipped with a ‘click-clack’ manual six-speed and a gorgeous wailing 10-cylinder. But lovely as the Audi is, its competition is nothing short of razor-sharp.

With 192bhp sent toward the rear wheel, the 1.2-litre V-twin Ducati 1199 Panigale R is exactly where it wants to be hurtling down Bylton Park’s back straight. On new rubber and ridden by World and British Superbike champion Neil Hodgson, the Italian machine looks frighteningly fast.

That’s why we’ve called in help from rising superstar and current Marussia GP3 driver Dean Stoneman to hustle the R8 around with a shouting chance. With a British Formula Renault and Formula 2 World Championship under his belt, Dean is staggeringly fast. And despite not having driven a manual-gearbox’d car on track before, he settles into a rhythm that sees the 542bhp supercar four-wheel drifting around the lap almost immediately.

It’s the R8’s carbon-ceramic brakes that really make up ground on the bike, enabling Dean to nose the car into the corners with fantastic commitment. The Ducati on the other hand appears to be trying to throw Neil off every time he clamps on the brakes, before trying to wheelie out of his hands on corner exits.

As physical and difficult as the bike is to ride however, a power-to-weight advantage three times that of the R8 ensures the bike just doesn’t understand slow. Blasting past 160mph down the straight and scrambling its way out of the corners, does the Audi stand a chance? Don’t write it off just yet, it does have four wheels after all…