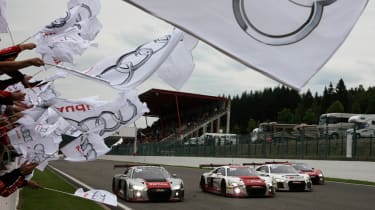 Customer racing drivers and teams can now purchase Audi’s latest race-winning GT3 car, the R8 LMS. Under the control of Audi’s factory team, the 2015 racer has already won at the Nürburgring 24 Hours and raced competitively in the Blancpain GT Series. Now it’s available to purchase for private running, priced from 359,000 euros excluding tax.

That equates to £261,316 in sterling, which is about the same price as a Lamborghini Aventador LP700-4. But unlike the road car, the racing Audi comes with full FIA Homologation – meaning it can race in a variety of international GT championships. 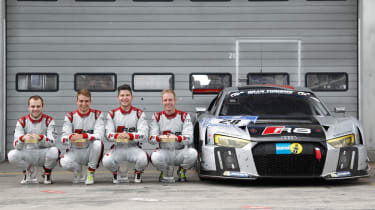 It’s for that reason that the car’s quoted power output will vary (it depends on the regulations of the series it competes in), but Audi has confirmed that in its least restrictive state, the LMS’ naturally aspirated 5.2-litre V10 produces as much as 577bhp and 406lb ft of torque. This is actually a little down on the unrestricted V10 Plus road model, which produces a peak of 602bhp and 413lb ft of torque. The road car is also four-wheel drive, a luxury the rear-driven racer loses due to GT3 regulations.

But the LMS is significantly lighter. With carbonfibre-reinforced plastic body panels, a race-spec interior and only the bare essentials included, the LMS is essentially an R8 that’s been on a very, very strict diet. Though exact weight figures vary depending on the series the car competes in, in its lightest spec the LMS weighs 1225kg. 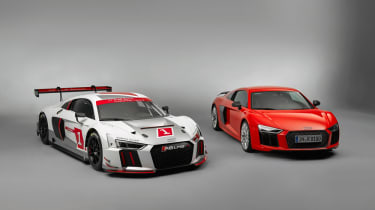 Combine this number with the car’s highest output and it achieves a power-to-weight ratio of 479bhp/ton, which is a substantial 86bhp/ton better than the 1555kg V10 Plus. Add this lighter weight to the race car’s track-focused adjustable suspension, downforce-inducing bodywork, slick rubber and a close-ratio six-speed sequential gearbox, and the overall package is significantly faster around a lap. 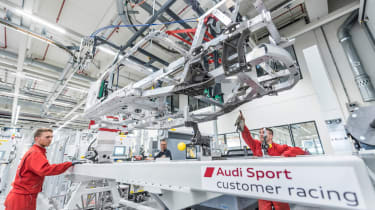 The first customer Audi R8 LMSs will enter production on 21 September with first deliveries commencing on 26 October, leaving plenty of time for teams to get testing ahead of the 2016 season. Audi has scheduled the production of 45 LMSs between September 2015 and March 2016, but given that its predecessor, the Audi R8 LMS ultra, was built in 135 units through its life, we can expect to see many more racing in the coming years.

evo’s Richard Meaden sampled the 2014 Nürburgring 24 Hours race-winning Audi R8 LMS ultra on track earlier this year. You can watch the video below.