We take an early look and passenger ride in the next Audi RS3, which has been out testing at the Nurburgring 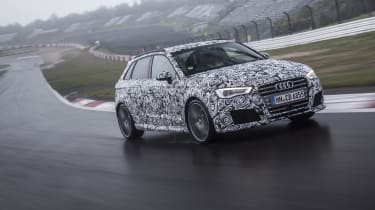 After completing more than 1000 laps of the Nurburgring during an intensive two-year development programme, Audi’s second-generation RS3 is nearing sign-off. The engineers at Quattro GmbH – Audi’s performance division – confirmed that it will buck the downsizing trend and retain the previous model’s characterful five-cylinder engine.

Power is up to around 370bhp – which will slash the 0-60mph sprint to just over four seconds – but modifications have been made to the intake and exhaust systems, and even the engine internals, to reduce both fuel consumption and carbon emissions.

Not only will the new RS3 be faster and cleaner than the model it replaces, it should also be more fun to drive. ‘We still have the Haldex four-wheel drive system,’ says Quattro boss Heinz Hollerweger, ‘but new software gives us more opportunities to send power to the rear axle. That gives the car more drift angle.’

Hollerweger also confirmed that the forthcoming model will ride more pliantly than the previous version, which should go some way towards answering the main criticism of that car.

A passive suspension system will come as standard, although buyers will be able to opt for an adjustable Magnetic Ride setup. Weight distribution has been improved for this new model, thanks in part to the relocation of the battery towards the rear of the car, while the brake calipers are lifted directly from the R8 supercar.

Carbon ceramic discs are available on the front axle for those drivers who’ll use their RS3 on track – or just push it to the very limit on the road.

The only gearbox option will be a quick-shifting twin-clutch unit. The turbocharged five-cylinder engine has been tuned for immediate response and low down torque to better suit real world driving habits.

From the passenger seat – Dan Prosser

At the RS3’s tech reveal event Audi laid on factory driver and former Porsche Supercup champion Frank Stippler to give high-speed passenger rides around the fearsome 13-mile Nurburgring. Despite the streaming wet conditions the car found impressive turn in bite, slipping into understeer in a progressive, predictable fashion.

The car – which rode on the passive suspension setup – seemed to absorb the bigger bumps and kerbs very well, and out of the slower corners Stippler was able to pull off a series of neat four-wheel drifts.

The RS3 felt rapid in a straight line and it’s certain to look the part when the camouflage wrap is peeled away. We’ll reserve judgement until we get to drive it for ourselves, although the early signs are very promising.