Audi has revealed the RS4 Nogaro special edition, to celebrate the 20th anniversary of the original RS2 Avant. Details here 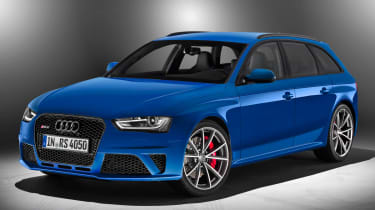 Audi has released a new special edition version of the Audi RS4, to celebrate the 20th anniversary of the first RS-branded Audi Avant. At 20 years since the launch of the ground-braking RS2, Audi has decided to honour the model with a special edition, painted in a new pearl shade of Nogaro Blue, reminiscent of the RS2’s iconic hue.

As well as the new paintjob, the RS4 Nogaro Selection has received a number of detail changes, giving the RS4 a markedly different look. Matt black roof rails and a gloss black finish on the front grille, window surrounds and sports tailpipes give a more subtle appearance.

Inside, the Nogaro is dominated by the half leather seats, which feature blue alcantara inserts, reminiscent of the RS2’s two-tone Recaro seats. The Nogaro Blue theme runs through the interior, with blue piping on the floor mats, blue weave in the carbon fibre trim as well as blue stitching in all of the leather.

The name Nogaro actually originates from a small French circuit, where Audi secured two French touring car victories in 1993, just before the launch of the original car.

The new model will make its debut at the Geneva motor show. Currently Audi has not confirmed UK sales of the Nogaro Selection, but the prices in Germany start from €87,300 (around £72,500), a considerable premium of about £8000 over the standard RS4.