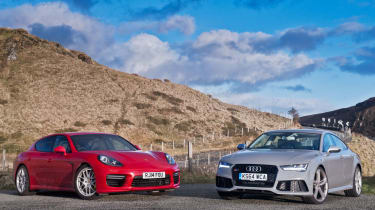 If we’re being pedantic the RS7 and Panamera GTS aren’t super saloons in the traditional sense because they have hatchback boots. They exist in the same sector of the market and they fulfil the same role, though, so they certainly count as direct rivals to the likes of the BMW M5.

With four-wheel drive systems both the Audi and the Porsche offer a certain all-season usability that their rear-wheel drive counterparts can’t match.

The Panamera is unusual in this sector of the market for being normally aspirated. The GTS version is almost certainly among the last of this sort of car to eschew turbo or supercharging and it has a particular charm because of it. Of course, Porsche does offer a turbocharged version of its Panamera, but priced at £108,000 it busts our self-imposed six-figure list price barrier.

The consequence, of course, is that the Porsche is comprehensively out punched by its rivals. With 434bhp and 384lb ft of torque it falls some 118bhp and 132lb ft short of the twin-turbocharged RS7.

What the Panamera lacks in performance it makes up for in throttle response and aural excitement. Some drivers will miss the accelerative thrust of a turbocharged powerhouse, but for those who prefer to wind out a normally aspirated engine the Porsche is in a class of one. The Audi’s 4-litre twin-turbo V8 is one of the very best downsized, forced induction engines, though, with good throttle response and masses of mid-range torque.

The Panamera uses Porsche’s seven-speed twin-clutch PDK gearbox, which is brilliantly quick in manual mode and very smooth around town. The Audi, however, uses a torque converter auto because the marque’s S tronic gearbox isn’t rated for this torque output. The auto ‘box is more than up to the task, though, and only loses a little to the Porsche’s more sophisticated gearbox in terms of shift speed.

Naturally, the RS7 comprehensively out-performs the Panamera. It’ll hit 62mph from standstill in just 3.9 seconds, compared to 4.4 for the GTS. Out on the open road the performance differential feels at least that big, with the Audi piling on speed in a manner that the Porsche just can’t hope to replicate.

As standard the RS7 is limited to 155mph flat out, but buyers can choose from a selection of derestricting packages, the most expensive of which raises the top speed to 190mph. The Porsche, meanwhile, will manage 179mph as it leaves the factory.

In heavy rain on tricky roads it’s difficult to argue with the RS7’s total stability and sure-footedness. The problem, though, is that it never delivers anything by way of engagement, so it very quickly becomes a one trick pony. It simply isn’t a great deal of fun. It is crushingly quick down a road and it accrues speed like nothing else in the class – travelling at such speed should be exciting, but in the Audi it sadly isn’t.

The Porsche, meanwhile, feels much more alert and agile with purer steering and a more responsive front axle. It’s also much more adjustable both on and off throttle – with is quite impressive for a car of this size – and that makes it far and away the more enjoyable car of this pair.

Whereas the Audi always feels its size and weight, the Porsche seems to shed the pounds and shrink around you when you start to thread it through a sequence of corners. In fact, the GTS is such a good steer that it really does give the BMW M5 a real run for its money as the class leader.

At £93,391 the Panamera GTS certainly is among the more expensive cars in this class and it’s undercut by the RS7 by some £9000. Both cars come generously equipped as standard and the quality of their cabins is befitting of their price tags, but the Porsche’s classier driving experience makes it the better value car of the pair.

Aside from straight line performance the Audi doesn’t do anything better than the Porsche. What’s more, the Panamera GTS is the last of the breed of normally aspirated super saloons and for that alone it’s worth celebrating.

To find out how the RS7 and Panamera GTS stack up against the best of the super saloon competition, check out May issue of Evo magazine (208). 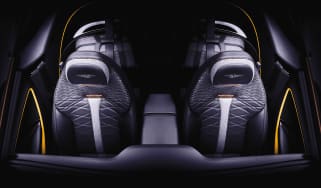