I’ve never experienced such a surfeit of power. It dominates the experience. Never mind that the S1 has a short wheelbase and an almost square stance, so feels quite twitchy. That feels like the least of my problems. Instinctively I know that the four-wheel-drive system should help me if I’m on the power, but such is the ferocity of the delivery that it’s hard to see the throttle as your friend. It doesn’t help that every violent flare of revs is accompanied by a sound like hornets massacring wasps with chainsaws.

I think it is towards the end of the fourth lap that I spin. I’d love to tell you how or why, but to be honest my brain has felt in need of a healthy RAM upgrade, or possibly its own ALS, since the first corner. It’s early in a right-hander, there is a flash of revs, we’re round in our own length, the clutch is out, I’m on the brakes, and as we stop safely in the middle of the bend I suck in some air for what feels like the first time in minutes. As I find reverse and point us back in the right direction, I realise that I’ve been straining every last iota of my mental capacity just to keep up with the S1.

Driving this hard feels like something beyond concentration. It’s more primal and more immersive, and I think I probably just ran out of processing power. All I can say is that I haven’t spun any of the WRC cars I’ve been lucky enough to drive, nor have I felt close to doing so. But I will spin this rallycross Audi twice more in the next ten laps or so. 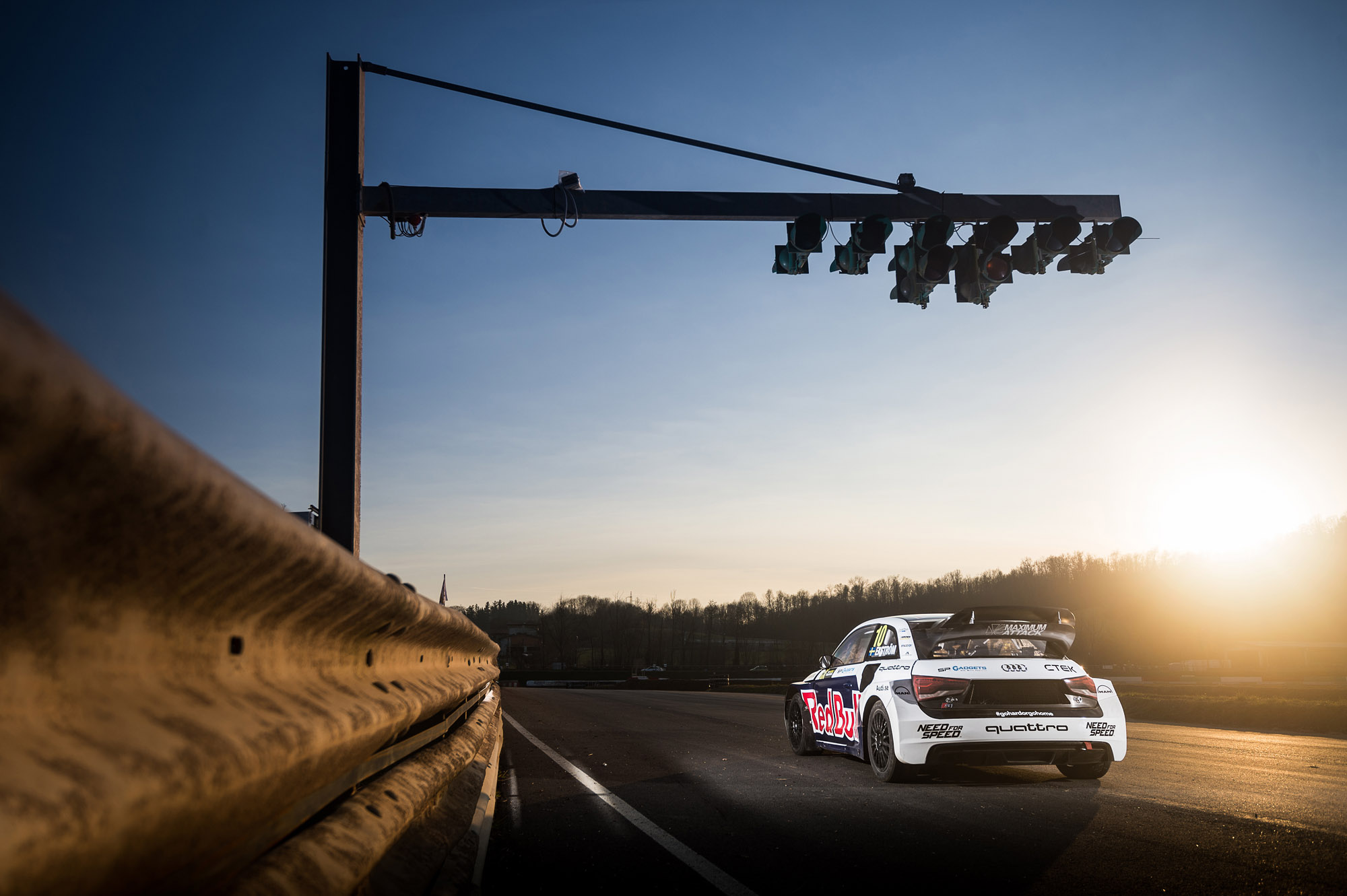 Initially I do a couple more laps then head back to the pits. I’m not a big user of superlatives, but this car has me overdosing on hyperbole as I try to describe in a hyper-speed stream of consciousness what it was like to the people asking. I’m not really one for swearing, either, but a single, heartfelt expletive is all I can manage at one point.

Then it’s back out and I try the car without the ALS for a few minutes. This makes it much easier, as although it’s still rabid, you can feel the swell of boost and give yourself just a bit more time to prepare for the arrival of the grenade. I realise I’ve actually adapted to the constant surface changes relatively well, and the tyres have a surprising balance between the gravel and tarmac. I almost feel like I’m getting to grips with it and begin craving the ALS, so I turn it back on. Within two seconds my head is threatening to overload and I’m on the back foot once more as the throttle reverts to detonating the 600lb ft bomb instantly under the slightest pressure. I fear nothing will ever truly feel quick again after this.

When I speak to Ekström on the phone afterwards, the first thing he says is: ‘Do you understand now why it’s my favourite? I never want to get used to that power. It is crazy.’ I spend some time speaking to Edward, too, who says that when he first gets back into a rallycross car, he doesn’t have any spare mental capacity to assess tyres or setup, he just has to concentrate on simply controlling the car. This is something of a relief, but I still can’t imagine what it must be like trying to race one, fighting for the same piece of ground as five other cars. As Mattias says, ‘You can see why there are some accidents!’

Despite having my capabilities in a car stretched to breaking point, I wanted to keep wrestling with the S1 all afternoon. The power is terrifyingly addictive. And in the moments when I did feel in control of it, when I was pinned to the bucket seat but sensing that I was actually manipulating the four spinning wheels underneath me in the way that I wanted, it felt as satisfying as any driving I have ever done.

Maker of the P1 and a key facilitator of Subaru’s rally heritage, Prodrive is working on a very special new project
Viritech Apricale – deep dive on the first hydrogen-powered hypercar
car technology

This is not another heavyweight battery-electric hypercar, rather it’s a showcase for a new hydrogen fuel-cell technology that can deliver 1200bhp in …
Used car deals of the week
used cars

This week, we found a special McLaren 12C, a rare Mazda RX-7 and more
Skip to HeaderSkip to Content