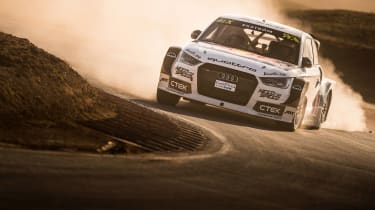 It couldn’t be a more impressive introduction. We’re approaching the small Maggiora rallycross circuit near Milan and the access road is providing us with a view directly down the barrel of the short start/finish straight. A pale, golden winter sunlight is cutting through the trees. In my mind’s eye I have captured the scene in Ultra Panavision, the camera slowly zooming in as a small ball of vehicular fury slides into the widescreen shot ridiculously quickly from stage right, trailing dust in its wake.

It’s an angry, four-wheel drift, only a hint of oversteer, mainly just sideways movement, every wheel spinning as the compact riot of arches and wings struggles to contain the energy beneath. It’s like an adrenalin-filled cartoon mouse running for its life on a polished parquet floor. I almost expect to see the motorised equivalent of Tom – a monster truck, probably – arrive a second later, scrabbling untidily into view and filling the screen as it gives chase. But it’s just Jerry today.

The drift turns to frantic forward acceleration and the Audi seems to cover the ground between us in the blink of an eye before the tiny ball of temper is sliding again. This time the nose is diving and the light rear end is adopting a few degrees of yaw as the S1 brakes hard for the upcoming corner. The sound – a buzzing, banging, compact cacophony – seems to have caught up now and it merely adds to the palpable rage. I’m in awe. Terrified awe. Because in mere hours I’m going to be right in the middle of all that fury, trying to steer it.

Last year I met Mattias Ekström (evo 208). After chatting about all sorts of things, I asked him a slightly tame question about what his favourite car was out of the many and varied ones he had raced. I expected a non-committal answer citing different thrills from different disciplines, but his unequivocal response was his Rallycross Supercar. He then said, very kindly, that I should try it some time... 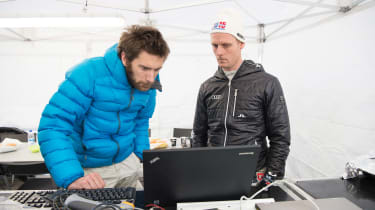 It’s no secret that I’ve had a bit of experience with dashing down lanes and through forests, but I’ve never had a go in a rallycross car before. To me rallycross has always seemed like rallying’s curious cousin. A sort of hybrid of gravel rallying, circuit racing, DTM and NASCAR condensed into a neat, fascinating and insane package. I say neat, but actually it’s a bit confusing as there are two codes of Rallycross, or RX – World and Global. World Rallycross is the FIA championship, with rounds mostly in Europe (and, for 2016, a certain Sébastien Loeb among its drivers). Meanwhile, a little like baseball’s World Series, Global Rallycross is confined to the USA.

Cars in both championships run to the same technical regulations. The only differences are that the fuel used in America is of a higher grade, and while the Global championship uses a Yokohama radial slick tyre, the World Rallycross cars, such as Ekström’s Audi S1, must use a Cooper crossply with moulded tread. These tyres somehow have to cope with both tarmac and gravel.

Walking up to the S1 in the Team EKS pits, it strikes me that there are, surprisingly, some inherited genes from the legendary 1980s Audi Sport Quattro S1. Catch it from some angles and those huge, distended box arches are like family bone structure passed down through the generations. Of course, many Group B cars ended up in rallycross events after they were banned from World Rally stages in 1986, and if ever there was a car that could claim to be a modern Group B car in ethos, this is it.

Open the boot and you’ll find fans and radiators. Look under the bonnet and you’ll see the engine sitting transversely, just as it would in a normal hatchback, but here mated to Sadev’s almost ubiquitous six-speed sequential gearbox. Every RX car runs a 2-litre, in-line four-cylinder turbocharged engine with a 45mm restrictor and they all put out around 565bhp and a frightening 600lb ft of torque. That’s in a car geared to just 120mph in top and designed to weigh a mere 1320kg including the driver, which today is Edward Sandström.