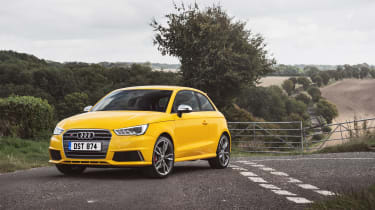 Audi is known to be somewhat inconsistent with its performance models; some hit all the right notes and others completely miss the mark. The S1 is definitely one of Audi’s better recent efforts because it’s both fast and entertaining to drive.

The S1 doesn’t have any direct rivals because it combines big hot hatch performance (and price) with a small hot hatch footprint, but it’s a very easy car to recommend nonetheless. Performance is very strong indeed but it doesn't come at the expense of traction, since the S1 uses Quattro all-wheel drive, like all of Audi's S models.

It doesn't come at the expense of usability either because driven at a gentler pace the S1 is among the calmer, more comfortable options in its size class, with relatively little road and wind noise and a pliant ride, and while the current generation A1 is now a seven year old car inside and out, the S1's cabin is such a simple, considered design that it hasn't really aged.

Given it's also available as a five-door car (most rivals commit you to either three or five doors, but few offer the option of both) it can be surprisingly practical too. Some other options in this class are more exciting, but few have quite the mix of all-round abilities as the S1. 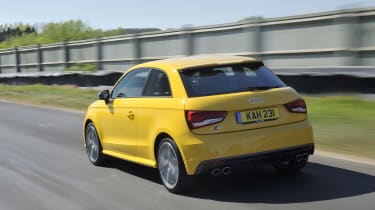 > Performance and 0-60mph time - A large engine in a small car certainly does the numbers, with acceleration to match hot hatchbacks from the class above. Read about the Audi S1's performance here

> Engine and gearbox - Audi's familiar 2-litre turbocharged petrol sits under the bonnet, with a 228bhp output that shades most in its class. The six-speed manual 'box is welcome, as is the traction of quattro all-wheel drive. Read about the Audi S1's gearbox here

> Ride and handling - Not as engaging as the best small hatches, but the pliant ride is welcome on craggy UK roads and there's real balance to the chassis too. Read about the Audi S1's ride and handling here

> Interior and tech - If you can stand the unrelenting black trim, the S1's cabin is a nice place to be. Five-door model increases practicality. Read about the Audi S1's interior and tech here 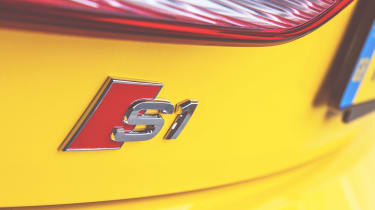 Starting at £27k, the S1 is pricey but that reflects its premium status and performance – among the hot supermini’s nothing is as quick as the S1. Two trim levels are offered, the Nav and Competition Nav: the latter hikes the price to £30k, for bigger wheels, privacy glass and carbon door mirrors.

For the price standard equipment is  acceptable rather than generous: automatic xenon headlights, sat-nav and cruise control are all included. Black is the only cost-free paint option, whereas the metallic and pearl effect finishes are priced at further £400, except for the Vegas yellow finish which is £600.

The standard seats are upholstered in a combination of cloth and leather, and crucilly are well bolstered, so there’s no reason to fork out £600 for the leather trimmed super sport seats. If you want heated items that’s another £200, about £100 more than Audi is cheekily charging for a front armrest. Unlike more senior S and RS Audis there are no performance-based options to choose from, Audi Drive Select is standard, so there’s no extras we’d tag as must haves. 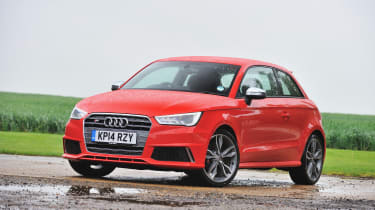 The Mini John Cooper Works proves the S1’s closest rival with a £25k list price. While the flagship Mini posts an identical power output to the S1, it can't match it for torque, making do with 236lb ft – 36lb ft less than the S1. That said, the JCW is an enjoyable drive, if not as involving and lithe as its predecessors.

The brilliant Volkswagen Golf GTI is the consummate every day hot hatch – it’s fast and fun to drive while also being more spacious and practical than the Audi. It's an example of how much closer the S1 gets in feel to cars from the class above, rather than similar supermini-sized models.