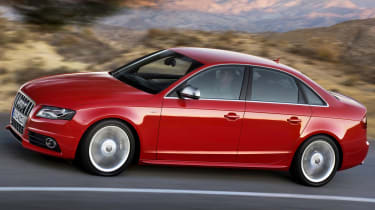 Audi has revealed the current flagship to the A4 range, the S4. The big news is a brand-new engine, which is two cylinders down on the previous S4’s V8. The new car uses a 3-litre TFSI V6, which offers comparable performance to the old 4.2-litre thanks to a high-spinning supercharger capable of 23,000rpm - which is far more effective than using twin turbos on the same engine.

An impressive set of figures, but thanks to the new engine, the economy and emissions are even more impressive: 29.1mpg (combined) and 225g/km are vastly better than the old V8 S4, which managed 21.2mpg and 322g/km. Not exactly the kind of numbers that normally sway super-saloon buyers, but very important ones in the current climate.

The figures get better if you choose Audi's S-tronic auto gearbox from the options list. The seven-speed twin-clutch transmission, which debuted on the Q5 soft-roader, boosts the green-credentials with 30.1mpg and 219g/km. It can be kept as an auto or controlled by steering wheel-mounted paddles.

An active sport differential is also an option, linking to Audi’s standard Quattro AWD system, which in normal circumstances sends a 60 per cent majority of power to the back of the car, with the remaining 40 going to the front. This is automatically varied between wheels in a fraction of a second if the situation asks of it. Drive Select also shows its face, altering throttle response, gearing and steering to suit your mood – allowing you to switch between comfort, dynamic and auto modes to make the hot A4 a multi-purpose tool. Cosmetic changes are typically discreet – silver side mirrors, a butched-up grille, quad exhausts and a barely-there spoiler at the back. Inside there’s a splattering of S4 logos alongside some sculptured sports seats. The car rides 20mm lower than a stock A4 and gains 18in S-design alloys. Prices will be around £36k when it hits our roads in spring 2009. That’s almost £15k less than the BMW M3, Lexus IS-F and Mercedes C63 AMG, but the Audi possesses around three quarters of their power – aiming it more in the direction of the BMW 335i or the more hardcore Mitsubishi Evo X. There’ll be a weapons-grade RS4 to rectify this, but with the RS6 saloon very fresh expect a bit of a wait before Ingolstadt’s truly super saloon arrives. What do you think of the S4? Are the only relevant A4s the one’s wearing a TDI or an RS badge? Or do you fancy a sub-£40k Q-car? Have your say on the forum.