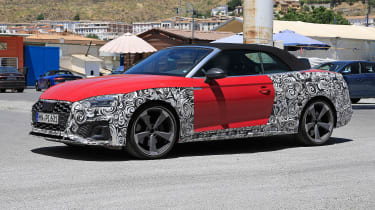 Audi’s updated S5 Coupe, Cabriolet and Sportback have all been spied completing final validation testing before they’re revealed later this year. We expect the changes to be aligned to those recently applied to the S4, combining new lighting, bumpers and most controversially its mild-hybrid V6 diesel engine.

In fact, Audi quietly announced that the current S5 Coupe, Sportback and Cabriolet would all pick up the 344bhp 3-litre V6 turbo diesel engine in its current guise, but with the new powertrain being ready so close to an incoming mid-cycle update, Audi UK has decided to wait for this more thoroughly updated model.

> Click here for our review of the new Audi S4 TDI

That powertrain, as mentioned before, is assisted by a 48V mild-hybrid system that powers a small electronically driven compressor that claims to improve engine response and bolster the torque curve at low rpm. This system will also power an integrated starter motor and generator, in the process increasing the start-stop capability and enabling engine-off coasting at low loads.

Aside from the new powertrain, the S5 will also receive a host of aesthetic changes, once again aligning it more closely to the new S4, including new LED lighting units and more assertive graphics on the lower bumpers. Also expect new wheels, colour and trim finishes and the blockier grille mesh found elsewhere in the Audi S model range.

The interior update will be a more subtle affair, with fresh trim finishes and a new touchscreen infotainment system making up a majority of the changes. That infotainment system has seen the removal of the console-mounted click-wheel selector in favour of a small, oddly shaped cubby now placed in front of the gear selector.

We expect the new S5 to debut at the Frankfurt motor show later this year alongside the wider reveal of the updated A5 range. But where an S4 TDI Avant’s inherent usability might make the switch to diesel seem an acceptable, if not commendable decision, the notion of an S5 TDI might be a bit harder to swallow.