We intend to transform our Audi TT base car into a track-snorting, cutting-edge, racing tool... 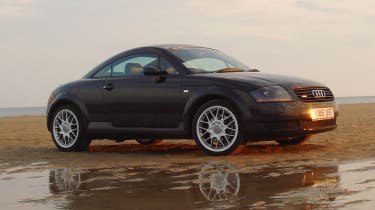 We’ve built a few project cars over the years: a Westfield XI that broke down barely 30 miles into its first trip to Le Mans, a V8 Capri that’s still not quite finished and an M3 that could lap the Nürburgring in eight minutes. Almost. No, it’s not a particularly auspicious record, but we’re not going to let that stop us forging ahead with our latest idea. And this time we’re thinking big. Really big. We’re going to build a Bugatti Veyron. Well, sort of.

The spark of inspiration for this madcap notion came at one of our recent trackdays, where a humble-looking MG ZR was making mincemeat out of most of the field, 911s included. Only the odd flash of flame shooting from the exhaust gave the game away – under the bonnet was a 300bhp turbocharged 2-litre Audi engine.

These lumps are pretty tuneable, so a plan soon started to form. We’d find an all-wheel-drive TT, lighten it, wind it up past 400bhp, rework the suspension and brakes and in effect build ourselves a mini Veyron. (Well, if you squint they look similar and, of course, Bugatti and Audi are sister companies; we reckon that’s close enough to justify cracking open the evo piggybank.)

Two weeks after that trackday I found myself swapping £5270 for the keys to a 105,000-mile Y-reg TT won on eBay. We were up and running, albeit with a slightly slipping clutch. The first job on the list for the ‘Veyrog’ (as it has been christened, taking the second half of its name from yours truly’s) will be to lose some unnecessary trim, then we’ll get cracking on the engine, but not before we’ve set a benchmark lap time around the West Circuit so we can keep an eye on the difference each change makes.

The big Bug should be afraid. Very afraid. We’re hunting it down.