A TT with RS performance but for a fraction of the cost? We reckon it can be done. This month we outline the plan for our mini Veyron and get some benchmark figures 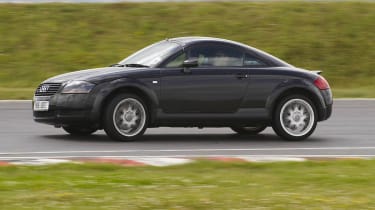 Our project car is underway. Andrew Ward and his team at Autograph now have our TT 225 in their Burnley workshops and are about to begin the first stage of transforming our humble little Audi into something with a little more spice. Well, quite a lot more if it all works out.

A quick recap in case you missed last month’s introduction. With a £5K pot available after we flogged our ‘Grand Challenge’ cars, we figured it was about time we found ourselves a new project. I pointed out that a TT would come in on budget, and that there should be a variety of ways of getting some decent horsepower figures out of the venerable Audi 1.8-litre turbo lump. With a few choice suspension tweaks we ought to be able to get it handling sweetly too. Later that same day we were bidding on eBay…

I’m not sure why, when you consider the exotica that passes through our car park, but there’s always a buzz of excitement in the office when we have a project on the go. By the time we’d won an auction and secured a tidy looking 2001, 105,000-mile 225 TT for £5270, the team had decided that what we were building was a mini Veyron, and some bright spark on the design desk named it after yours truly. It’s quite unlikely that we’re going to able to match any of the Bug’s extraordinary performance figures, but if we can create a few of those fireworks for what would be little more than loose change to a Veyron owner, then we’ll be very happy.

Andrew Ward reckons it’s quite possible to get some big power from this engine, and that it’s very easy to tap into some of those reserves. Autograph’s ‘Stage Three’ tuning package will release 300bhp and 300lb ft of torque without even opening the engine, although if we did, and fitted a conrod set and a bigger turbo, then 400 horses would be ours. If we really went crazy and bored it out to 2.2 litres and fitted some really trick stuff, a massive 550bhp would be achievable. That’s for the future, though. To start with we’re aiming for 300bhp, and with it we’ll lighten the car and upgrade the wheels, suspension and brakes to see just how quick we can make the little TT go.

Before any of that, though, we had to set a few benchmarks. As standard the car weighed 1395kg (quite hefty for a little-un, but then a Veyron tips the scales at 2022kg), dealt with the dash to 60mph in 7.0sec (the Veyron is quite good at this discipline, catapulting you there in about the time it takes to sneeze) and topped out at 150mph (a little short of the Bugatti’s 253mph, although it’s only fair to point out that the TT cost us less than one of the Veyron’s tyres). The most important benchmark, though, is the Bedford Autodrome lap time, which combines all those factors while adding braking and cornering ability to the mix.

We haven’t timed a Veyron around the West Circuit yet, but I don’t think it’d be troubled by our TT in as-purchased trim. In short, it was awful. For a start it came with mismatched rubber – the left rear was a budget tyre, while the others were all Bridgestones. The markings suggested that the cheapo tyre was the same size as the rest, but a quick glance was all you needed to see that it wasn’t – the height of the sidewall was a whole centimetre shorter! Handling, therefore, was a touch inconsistent. The TT oversteered through right-handers and understeered through lefts. But this wasn’t the greatest hindrance to a half-decent lap time. That honour went to the brakes.

With John Barker alongside in the Audi’s passenger seat, we completed an easy out-lap to warm everything through. But approaching the first corner proper – Hangar Hairpin, which requires some serious slowing from fourth gear down to second – we discovered that the old, worn, poor quality pads were already too hot, causing the pedal to go mushy underfoot and the TT to shed speed only gently, rather than in the major hurry I was asking for.

So the laps were predominantly an exercise is brake management and my best time of 1:35.4 was the third slowest we’ve recorded at the West Circuit since the Pif-Paf chicane was remodelled 18 months ago. There is some good news, though: the engine and gearbox both felt good and, obviously, it should be very easy to make some big improvements. I can’t wait to get back to Burnley.