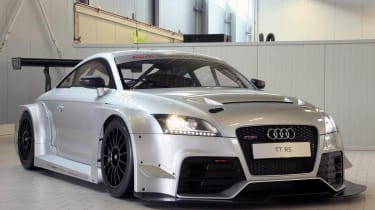 A new race-ready version of the Audi TT RS has been revealed, ready to compete in German endurance races. Developed in conjunction with Audi’s Technical and Quattro divisions, the competition car has been put together by Raeder Motorsport. With its wide arches, lowered stance and large rear wing, the Raeder RS has triggered speculation that Audi are considering swapping A4 for TT in the DTM, though this would involve a switch from the current four-door rules of the sport. What we do know is that it's the basis for a customer motorsport package for VLN racing at the Nurburgring. Though some components are shared with the larger R8 Le Mans racer, the familiar 335bhp 2.5-litre turbocharged engine of its road going equivalent remains (meet evo's Audi TT RS long termer), while new race-developed suspension and an aero package complete the transformation. The TT RS will make its debut in the Endurance Championship at the Nurburgring on October 16th and 30th, with driving duties shared by Marc Hennerici and Christopher Mies.

Find out about the all-new Audi Quattro coupe concept