Audi has revealed the new five-door TT Sportback model, ahead of the 2014 Paris motor show 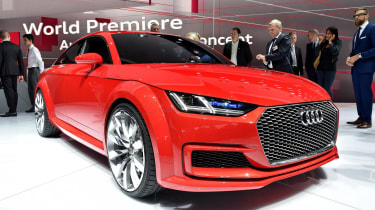 Audi has used the VW Group night presentation ahead of the 2014 Paris motor show to present the TT Sportback, a five-door hatchback based on the third-generation coupe.

This isn’t the first time Audi has extended the TT’s features to a form other than that of the traditional coupe, but the production-ready look of the concept and Audi’s recent suggestions that other models could be added to the TT line means a car like the TT Sportback could be quite close to reality.

Whether the reality will share the concept’s 394bhp, 332lb ft 2.0-litre TSI unit is a different matter. The 197bhp/litre output has been achieved through different intake and exhaust camshafts, new aluminium pistons, and forged steel crankshaft. A redesigned cylinder head increases gas flow and the turbocharged now outputs 1.8 bar of boost.

The upshot is a 0-62mph time of 3.9 seconds, aided by a seven-speed S tronic transmission and quattro all-wheel drive.

Like the TT on which the concept is based, the TT Sportback’s steel and aluminium places style over outright practicality – though the pair of full-size rear seats means the Sportback doesn’t limit rear-seat access to those of toddler size.

Aft of the coupe-style front end – with its wider, flatter grille – the TT Sportback shares fastback styling cues with that of Audi’s A5 and A7 Sportbacks, though features like the wide wheel arches and arched roofline hark back to, in Audi’s words, ‘the TT’s formal idiom’.

That extends to the headlights, which feature LED and laser elements split by distinctive LED daytime running lights and directional LED indicators. LEDs handle dipped-beam lighting while laser units and LEDs combined provide high-beam illumination, generating a spread of light that extends several hundred metres in front of the car. A camera spots upcoming vehicles to blank out a section of the light pattern as necessary.

Inside, similarities to the production TT are even more stark. Driver and passengers enter through doors with frameless windows, while the dashboard and instruments are closely related to the production vehicle. The simple, driver-orientated layout is punctuated by five jet intake-style vents and Audi’s ‘virtual cockpit’ instrument display.