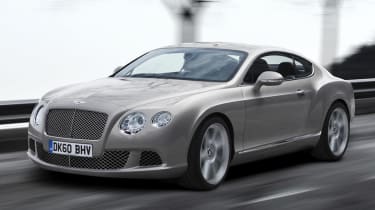 Familiar, but different. That sums up the revised Bentley Continental GT. Not only is every body panel new, but most are now aluminium, helping reduce weight by 65kg – although 2320kg still isn’t much to boast about.

The 6.0-litre twin turbo W12 has been mildly revised, with power and torque climbing to 567bhp and 516lb ft respectively. It can also run on any combination of petrol and E85, but despite Bentley’s protests to the contrary, you wouldn’t call it efficient, with a combined economy figure of 17.1mpg and emissions of 384g/km.

The six-speed ZF auto has also been tweaked and shift times have dropped by 50 per cent, yielding a 0-60mph time of 4.4sec and 0-100mph in 10.2sec. Front and rear track widths are up (by 41mm and 48mm respectively) and the torque bias is now more rearward at 40:60 rather than 50:50 with the aim of delivering more grip and a more sporting driving experience .

The big news is reserved for 2011, when an all new 4.0-litre V8 will be available. Details are still sketchy but Bentley promises that while performance will hardly suffer, emissions will be reduced by 40 per cent. Let’s hope they reduce the weight at the same time.