Bentley's CEO Wolfgang Durheimer has told evo the company is developing a diesel engine, an SUV, lightweight peformance variants - and returning to racing 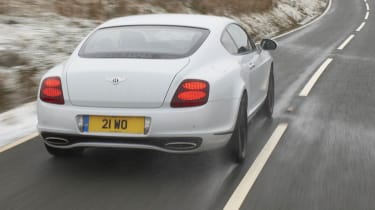 Bentley’s new boss has confirmed that work is progressing on a range of major innovations for the brand, set to include the arrival of diesel and hybrid powertrains, development of a new SUV model, a return to racing - and a dramatically lightened version of the Continental Supersports.

Bentley CEO Wolfgang Durheimer, the former Porsche R&D boss who took control of both it and Bugatti six months ago, told a group of journalists of his determination to transform the company’s fortunes with a dramatic increase in both its model range and its sales volumes. Bentley has yet to return to the 10,000-a-year production it managed before the global recession, but Durheimer said he believes the company could ‘maintain its exclusivity’ while selling up to 30,000 cars a year.

Bentley’s first SUV will be a vital part of this expansion. This will be developed around shared architecture from elsewhere in the Volkswagen empire – for which read the next Porsche Cayenne and Audi Q7 – but with what Durheimer described as Bentley’s ‘uniquely British design and craftsmanship.’ He confirmed that the proposed new model will be more expensive than the Porsche Cayenne Turbo S, meaning it will likely be the world’s priciest SUV. He also said that, like the original Cayenne, Bentley’s SUV will be engineered to provide proper off-road performance to the few buyers who want it, with this being a vital part of creating an ‘authentic’ product. The decision on whether to start serious development of the car now rests with the VW board, although Durheimer himself is clearly fully behind the project: ‘I think a Bentley SUV would have a tremendous pond to fish in.’

We also learned that Bentley is working on both hybrid and diesel powertrains, both of which are likely to be offered on the existing model range within the next couple of years, in addition to the new V8 petrol engine that will be fitted to the Continental next year.

Durheimer admitted that he had been among the group of senior managers within Porsche that was sceptical of performance diesels, but said the rate of development of technical development – and the fact diesels can now ‘sound and feel’ like petrol models – had won him over. But while Porsche is using a development of Audi’s V6 diesel in the Cayenne and Panamera, Durheimer indicated that Bentley’s motor will be a development of the larger 4.2-litre V8 TDI motor.

And, as if that wasn’t enough, Durheimer also confirmed plans to take Bentley back into top flight racing, although he indicated this wouldn’t be a return to Le Mans for as long as Audi and Porsche are competing there. All in all, it looks set to be a busy few years in Crewe.