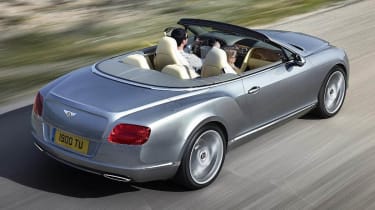 Bentley has released images of the revised Continental GTC cabrio ahead of its debut at the forthcoming Frankfurt motor show.

Changes are relatively minor – there wasn’t much wrong with the way the old car looked – with the GTC getting a the same revised front end that was given to the Conti coupe earlier in the year, some crisper panel lines. Inside the cockpit there’s luxurious new trim and the arrival of a touchscreen satnav system with Google mapping. And – it had to happen – there are also LED daytime running lights.

Mechanical changes are limited to the arrival of a slightly more powerful version of the 6.0-litre twin-turbocharged W12 with 567bhp and 516lb ft and Bentley’s revised four-wheel drive system with a 60-percent rear biased torque split. The kerbweight has been reduced by 70kg compared to the previous GTC, with a 4.5 second 0-60mph time, a 10.9 second 0-100mph time and a claimed 195mph top speed.

The GTC is available to order now – yours for just £149,350 – with customer deliveries beginning in the autumn.