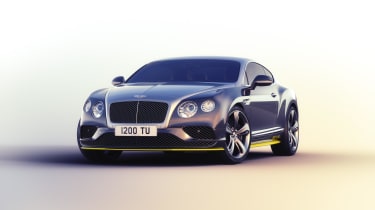 Further up the automotive ladder, the worlds of cars and aerospace seem inexorably linked, as indicated by the launch of seven new Bentley Continental GT Speed models from Bentley’s Mulliner department.

The limited run of seven GT Speed models don’t quite have the aerobatic capabilities of the jets, but each car features distinctive features that mirror the appearance of the aircraft.

Each is painted in the widely known two-tone split colours of Hallmark and Onyx, with highlights in Breitling’s unique yellow – colour matched exactly on the Pantone scale. Bentley carries this bespoke colour scheme into the cabin of the car, with Breitling accents covering the interior and sculpted seats.

The cars have logos and graphics in the headrests, corresponding to the individual jet that inspired the car. The car will also get its own uniquely numbered tread plates.

A striking carbonfibre panel on the dashboard features an image of the aircraft in the Breitling Jets’ signature ‘Avenger’ flight formation. This too corresponds to an individual jet, with one aircraft picked out in Breitling Yellow.

This summer the Breitling Jet Team will be touring across the USA and Canada. The cars themselves will debut at the Boeing Seafair Airshow on July 31 in Seattle, one of several venues where the display team will perform.

The handover process is suitably special, too – the key for each car is to be handed over to the owner by the pilot of the corresponding plane. But not before they’ve been taken for a flight in the jet at the airshow – surely as exciting, and terrifying, as handovers get.