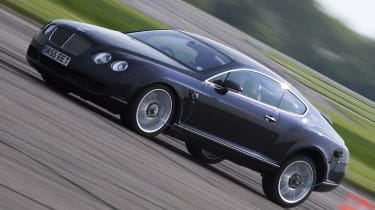 Combine a kerb weight of nearly 2.5 tons with a top speed that some tests have suggested is over 200mph, and it's no wonder that the Continental GT has the largest diameter brake discs ever seen on a production car. What's more, Bentley is now offering an upgraded braking system on what it is calling the Continental GT Diamond Series. The Diamond Series is being built as a celebration of 60 years of Bentley production at Crewe, costs an extra £15,000 over the standard car, and features a number of interior and exterior trim enhancements to give the GT a more sporting appearance. But of far greater interest are the addition of carbon-ceramic brakes - a first for a road-going Bentley. Hiding inside new, 14-spoke, 20in wheels, and clamped by eight-piston callipers, the cross-drilled carbon-silicon-carbide discs have an increased diameter of 420mm at the front (15mm larger than the standard steel items) and 356mm at the rear (up 19mm) and reduce unsprung weight by a total of some 23kg - although whether you'll notice this on such a heavy car is open to question. To see how well they work, Bentley has let me loose around Bruntingthorpe Proving Ground in an engineering car fitted with the new brakes. There's a second car equipped with standard steel discs waiting in the wings for comparison purposes. To start with, the ceramic brakes feel no different. There's no extra noise, while pedal-feel seems very similar to that of the standard car, with a relatively soft initial travel before the real braking force comes on-stream. As you'd expect, it's only after repeated high-speed stops that any differences begin to show, but even then it's only during violent lane-change manoeuvres, where the ESP program starts to struggle to control the back end of the steel-disc car as the rear brakes get beyond their normal operating temperature. Whether an average Conti owner would ever get to this point on the road is debatable, so the best reason I can see for specifying ceramic discs is that they should last the lifetime of the car. No, actually there's another reason: after a particularly hard driving stint at night you should be able to get them hot enough to see them glowing cherry-red, just like a race-car's do. Now that's seriously cool.