Aimed at the owner-driver, the Spur is officially the world's fastest four-door production car 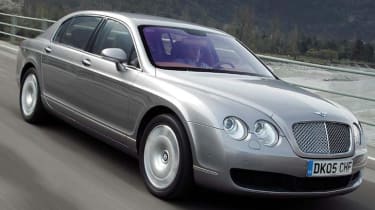 A couple of years ago a motor industry analyst was asked to explain the attraction of Bentley to the bosses of a Far Eastern car maker. He quickly discovered that, using the rational tools of his trade, he couldn't. On every statistic except engine torque and acreage of chrome, the Bentley was categorically beaten by far cheaper rivals. He was left trying to explain to his clients that the £70K supplement for an Arnage over a Mercedes S600 was basically down to the Bentley's badge, proper wood dashboard and exclusivity. They expressed polite disbelief and left.

Bentleys have always had an abundance of character, of course, an unquantifiable specialness that comes, in large part, from being unashamedly different. Only now, in the Continental Flying Spur, do we have what looks like the first no-excuses Bentley saloon. Not only is it the fastest production four-door in the world - officially clocking 195mph, unofficially likely to top the double-ton given a long enough straight - it's also built to the sort of standards that the analyst's clients would have felt far more comfortable with. The question is whether the all-important character has survived the translation.

We've got used to the Continental GT coupe, of course, already a familiar sight in better-heeled parts of the land and still selling strongly. Despite being 20in longer overall (with 12in stuck into the wheelbase), the Flying Spur shares 60 per cent of its componentry with the GT and will be assembled on the same line at the same time. Settings have been tweaked to take account of the Spur's marginal increase in mass (90kg) but otherwise the suspension, brakes and steering are all identical.

The styling is unlikely to pass without comment. Like the GT, the Spur lacks the defiantly bluff stance and attractive caddishness of the Arnage. But if you're a fan of the coupe then you're unlikely to find anything on the saloon to offend you. The cabin is familiar, with lashings of proper wood and high-quality leather. Everything's a pleasantly snug fit around the driver's seat, too, although a couple of details jar, like the cheap plastic interiors of what initially look like Arnage-style ball-type metal air vents. Strangely, the rear seats feel less special than you would expect. Bentley reckons this is a car to appeal to self-drivers rather than chauffeured types, hence the lack of the sort of rear-seat kit that the Lexus LS430 packs as standard.

If you've already driven a Conti GT then you've got a pretty good idea what the Flying Spur is like. Both are engine-defined cars, living for those moments when the world is clear and straight enough to engage warp. In town it's effortless, autobox blending ratios with maestro virtuosity, air suspension digesting road surface roughage. Our Italian test route soon takes us onto the autopista and the Bentley comes alive, responding to full throttle with the sort of shove you could probably expect if you loudly questioned a bouncer's parentage. The acceleration barely diminishes, and by the end of a two-mile stretch of motorway the speedo needle had reached 300kph (186mph) with plenty more to come. Stability is outstanding (thanks, in large part, to a big diffuser ahead of the rear bumper), and refinement is still good enough to allow conversation in normal tones. And the vast front brake discs are reassuringly strong.

On twisty roads the Flying Spur keeps up the Conti GT impression - composed and confidence-inspiring, but not enjoying itself particularly. Front-end responses feel slightly keener and the steering is fractionally more direct, most likely due to some weight saving in front of the A-pillar and the an uprated anti-roll bar. The longer wheelbase should encourage more understeer but doesn't, suggesting the revisions work. The changes will be rolled onto the GT at some future date, either as a running upgrade or when the more powerful, 600bhp-ish version is launched.

Character? Yes. Viable business plan? Hmm... If all goes to script, the Flying Spur will become the biggest selling Bentley saloon of all time - by a factor of about six. The company hopes to build around 3500 in its first full year of production. Given that buyers in the £100K-plus segment have a well-documented aversion to saloons, it sounds like a brave prediction. Yet as the GT has already proved, few car makers are better than Bentley at persuading the mega-rich, even the merely very rich, to dig deep enough to realise the dream.