BMW provides the MotoGP safety car once again. For 2011 its a hardcore BMW 1-series M Coupe 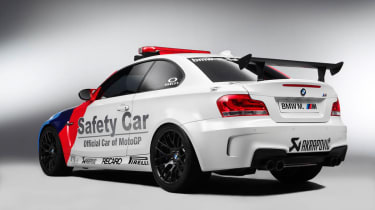 BMW has unveiled its official safety car for this year’s MotoGP world championship. The unique one-off is based on the forthcoming 1-series M Coupe. However, only the 340bhp straight-six turbo engine and drivetrain have been carried over unaltered from the production model. Suspension has been replaced for an adjustable set-up, with dampers independently variable for both bump and rebound. Brakes are also new, the standard floating caliper set up having been replaced by a six-piston, fixed-caliper racing system. Adjustable front and rear axle camber, coupled with adjustable ride height, means the 1-series can be set up to suit any circuit on the championship calendar. The car also benefits from a revised aero package, including an adjustable rear wing and an additional front splitter integrated into the underside of the front apron. Weight saving measures stretch to polycarbonate side and rear windows, a carbonfibre bonnet and an Akrapovic titanium racing exhaust, which according to BMW, will ‘deliver a captivating sound for the benefit of spectators’. The weight saving continues on the inside. The front seats have been replaced by racing buckets, complete with six-point harnesses, while the rears have been replaced by a roll cage. The obligatory Alcantara M steering wheel also makes an appearance. The 1-series M Coupe is one of three safety cars being provided by BMW, whose involvment with MotoGP enters its 13th year in 2011. It will be joined by an X6M and an M3, with a 535i Touring acting as the medical car. The first round of the MotoGP kicked of in Qatar on March 20, with the next race in Jerez, Spain on April 3.  See our BMW 1-series M Coupe review and video here Huge BMW 1-series M Coupe picture gallery