BMW has released a whole line of performance parts for the the 2-series Coupe. Pictures and details here 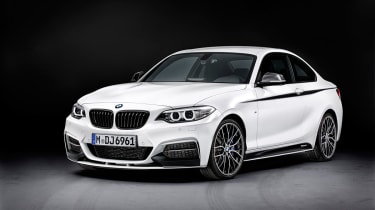 BMW has announced a range of M Performance parts for its recently launched 2-series Coupe model, including a limited slip differential option for the M235i. The upgrades were announced at the Essen motor show, a popular German tuner-oriented show, along with news of an M235i racing car.

Upgrades consist of both mechanical and aesthetic packages, and will be available for all models throughout the range, which goes on sale in the UK next March.

Owners of the 220d models will be able to specify a mild ECU re-map, boosting power by 16bhp to 200bhp, without harming the car’s fuel consumption of CO2 emissions. There’s no power upgrade from the M235i, although you can buy a sports exhaust for a slightly improved sound.

BMW M Performance Sports suspension can be ordered, which consists of a 20mm drop in ride height, thanks to slightly shorter coil springs as well as revised dampers. This can be purchased along side a performance brake kit and 19-inch forged alloy wheels.