The BMW 2-series replaces the 1-series Coupe, with the performance M235i getting a Racing version 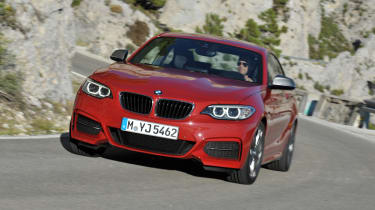 The new BMW 2-series has been officially revealed. Replacing the 1-series Coupe, it apes the larger 4-series and 6-series by getting its own naming structure. Its styling is also more separated from its hatchback base car than its predecessor.

Engines at launch will be the 181bhp 220i petrol and 181bhp 220d diesel, the latter combining a 0-60 time of around seven seconds with claimed 64.2mpg fuel economy if you select the eight-speed automatic gearbox, which is optional on all launch models in place of a standard six-speed manual transmission.

Most interesting to us, though, is the M235i. Essentially a coupe version of the BMW M135i – one of the best hot hatchbacks on sale – it gets a slightly more powerful, 321bhp version of BMW’s 3-litre turbocharged straight-six petrol engine endowing it with a 4.8sec 0-62mph time and a 155mph electronically limited top speed. Pick the auto ‘box and a combined 37.2mpg is claimed. Biggest news of all, though, is the addition of a proper limited-slip differential, something the M135i sorely lacks and the improvements of which the video below proves.

A Driving Performance Control switch, allowing drivers to tweak the car’s settings, is standard wile an M Sport braking system is on the options list. Suspensions options are vast, with a choice of three setups over standard; Adaptive M suspension (electronically controlled dampers) and M Sport suspension (stiffer springs and dampers) both drop the 2-series by 10mm, while M Performance sports suspension gets bespoke dampers and rides 20mm lower than standard.

The M235i tops the range for now, but a BMW M2 (with a tuned up version of the M235i’s 3-litre straight-six) looks nigh on certain, quotes from M Division CEO Dr Friedrich Nitschke suggest. ‘We haven’t made a decision yet, but the 1M coupe was so successful, that in my opinion, I am absolutely sure we will build a successor’, he told bmwblog.com.

The 1-series M Coupe is one of our favourite performance cars of recent years. It beat the Porsche Cayman R and Audi TT RS in our sports coupe group test before vanquishing the Lamborghini Aventador, Ferrari FF and its BMW M5 bigger brother for a heroic podium finish in evo Car of the Year 2011.

The look of a new 1M is previewed by the rather exciting BMW M235i Racing. It replaces the M3 GT4 in the BMW customer motorsport line-up, which continues to be headed by the Z4 GT3. The M235i Racing will be eligible for use in a variety of racing series and events, not least the VLN Endurance Championship, which takes place at the Nurburgring and encompasses the headline Nurburgring 24-hour race that typically has a heap of BMWs in its lengthy starting grid.

The Racing doesn’t present a big overhaul over the standard M235i, with a mere 7bhp power increase to 328bhp, while there’s an FIA-approved roll cage, a larger racing fuel tank and M Performance front and rear spoilers, diffuser and carbon wing mirrors. It’s 59,500-euro price tag (excluding taxes) converts to around £50,000, or £60,000 including VAT.

The video below serves up a preview of the M235i Racing's look and sound, though it's fair to say the freezing cold surface doesn't do its grip levels too many favours. Squirming around for grip may make for a fun trackday car, but it's less likely to satisfy when you're fighting for position in a race. Still, the swept-aside snow gives a good indication of how unfair the conditions are, and the flaring of revs gives a decent indication of how hard the Racing will sound...