500bhp i models with 80-miles of electric range rumoured

New rumours suggest BMW will build hybrid-electric equivalents of its 5- and 7-series saloons later this decade. Potentially named the i5 and i7, the new models would utilise power from both electric motors and combustion engines to offer increased range and more power.

Just recently, BMW had confirmed it was developing a hybrid version of its 3-series, and it already sells a hybrid version of the current 5-series (pictured), but the news of larger i cars comes with confirmation they’d be built on a new, long-wheel base 5-series based platform.

Unsurprisingly, it's all still under early stages of development, but an all-electric range of 80-miles appears to be the target. If performance figures are to be believed, the twin-electric and combustion hybrid powertrain could produce over 500bhp in total, with close to half of that coming from a four-cylinder engine. 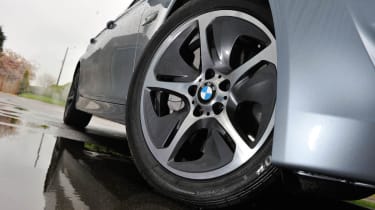 Some are projecting a concept version of the car will arrive at the Frankfurt motor show later this year, before production begins in 2018. That would coincide with the enforcement of stringent new zero-emissions regs in the US, which will dictate that a minimum of 4.5 per cent of a manufacturer’s car sales must be zero-emission.

The Tesla Model S is expected to be a main rival, so a competitive £85,000 starting price would make sense. The hybrid BMWs will also have to posses a sporty character to take on the all-electric Tesla, something we know BMW can do thanks to its i8 sportscar.