BMW will reveal full details of its new 3-Series Touring M Performance upgrade package, as well as the rest of the M Performance range, at the Essen motor show on 1 December 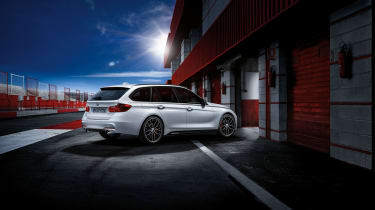 Following recent success in the DTM series (German Touring Cars), BMW has announced its future plans for the new M Performance line of upgrades, available for most of the range. The Essen motor show on 1-9 December will host the unveiling of the latest upgraded model, the 3-Series Touring.

For the 320d Touring, expected to be the most commonly upgraded model, new upgrades include front and rear bumpers, deeper side skirts and 20-inch lightweight alloy wheels. An M-Performance power kit can be specified, and will take power from 184bhp to 200bhp in 320d form. The M Performance suspension and brake upgrade adds what BMW describes as 'a particularly sporty set-up'.

The interior also receives a number of upgrades, including lashings of carbon trim, a sports steering wheel with 'Race Display' and stainless steel pedals. The upgrades are due to go on sale in Spring 2013, and the full details of all upcoming M Performance upgrades are set to be revealed in full at the Essen show.