Which is the best £50K V8 saloon, the new four-door version of BMW’s M3 or the mighty Mercedes-Benz C63 AMG? 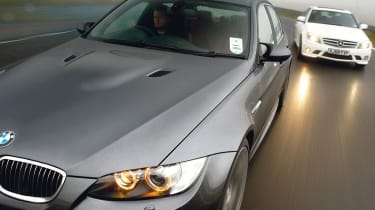 The best kind of formula is a simple one. Take history’s most famous equation, E=MC2. We all owe a debt of thanks to Albert for that insight into the relationship between energy, mass and velocity: entertainment equals a muscle-car times itself. Without it, American teenagers in the Fifties wouldn’t have had anything to do on a Saturday night. And this twin test wouldn’t be happening.

Truth is, the best ideas don’t fade away. The modern compact high-performance V8 saloon is a fine example of cutting-edge automotive engineering, but its roots run all the way back to any convenient set of traffic lights at midnight in smalltown USA. The psychology of those hallowed rituals lives on, too. Mercedes C63 AMG and BMW M3 saloon customers are unlikely to admit detecting even the faintest whiff of teen spirit but there are issues to resolve here: which car has the harder punch, which will gain the admiration of its owners’ peers. Essentially, which one gets the girl. And, tempting as it is to call it here and now, all bets based on previous form are off.

In its earlier guises, both four- and six-cylinder, the M3 has stood its ground heroically, but in its current V8 form it faces sterner new challenges, some of its own making. Its higher power output is, to some extent, offset by its extra bulk, and while as a four-door saloon it’s a little shorter than the carbonfibre-roofed coupe, it’s also wider and taller and, at 1680kg, another 25kg heavier. The resulting power-to-weight ratio of 250bhp per ton, while undeniably impressive, no longer qualifies as any kind of natural advantage in a sector where all of the opposition is V8-powered. Especially when the old enemy, AMG, is back with a bigger gun.

It badly wants to be the new face of sharply dressed violence, too. Hard as it is to imagine the staid, slightly portly proportions of the latest C-class acquiring a bring-it-on stance, the C63 AMG has achieved just that. Should BMW be worried? If it believes that size matters, let’s just say there are grounds for paranoia. The gleaming, hand-built, personally signed centrepiece of any AMG is its engine, and the C63’s is… big. At 6208cc it has a swept volume some 2.2 litres larger than the BMW’s, and with 451bhp and 442lb ft of torque, the C63’s outputs eclipse the M3’s by 37bhp and 147lb ft. Fortunately for the BMW, the Merc also weighs 50kg more and, therefore, nets only a slightly better power-to-weight ratio of 264bhp per ton. Torque-to-weight is a different story, though, with the C63’s 260lb ft per ton crushing the M3’s 178. And while the M3’s six-speed manual gearbox should, in theory, claw back some of the initiative from the auto-only C63, bear in mind that the 7G-Tronic transmission is no slouch when it comes to swapping cogs itself, and here it comes with a pair of steering-wheel paddles if you fancy doing the job yourself. The performance figures are desperately close. In the benchmark sprints to 60 and 100mph it’s the Merc that predictably nicks the edge, recording 4.7 and 10.3sec to the M3’s 4.9 and 10.7. Whatever the conspiracy theorists might say, there is no substitute for capacity, and 6.2 litres never buckles against the clock, auto ’box or not. In particular, that 442lb ft of torque has a deep-welled, inexhaustible quality and mid-range presence that places the concept of ‘effortlessness’ in an entirely different context. When overtaking, the acceleration that chuffs air from your lungs and the nonchalant murmur of exertion from under the bonnet simply don’t seem to belong to the same physical event. The AMG motor’s linear delivery feels monumentally weighty from what seems like just a handful of revs too, the savage push ebbing only slightly over the final 1000 revs to the 7500rpm red line. Even though the M3 has another 800 revs in hand – and this is where its engine, in contrast, is hauling its hardest – the damage has already been done.

But if the M3’s engine’s stats aren’t as strapping as the C63’s, the hardware is, if anything, even more wonderful. The 4-litre V8 is a purist masterpiece from BMW’s M Division. In essence a chopped-down version of the V10 that powers the M5, it shares the same basic architecture, including the 90-degree cylinder-bank angle. A high specific output and high-revving capability are core M Division values and they’re perfectly expressed here. Its 414bhp arrives at a barely believable and inescapably scalp-tingling 8300rpm, and while the slower-revving AMG powerhouse doesn’t even get close to 100bhp per litre, the M3’s, at 103bhp per litre, lands comfortably on the right side.

It may lack the torque-dense flexibility of the Merc’s V8, but the M3’s motor feels a combatively strong, destructively heavy hitter all the same: incredibly free-spinning, deliciously smooth and fabulously responsive over a broad rev-band. In some ways, it’s all the more rewarding for being contained in such a comparatively sober-looking car. The figures don’t fully convey the explosive urgency of the delivery. Below 2000rpm the engine doesn’t feel as heavy-limbed as the Merc’s, but thereafter it hurtles to its limiter like an earthbound meteor. And the exhaust note is plain thrilling, the resonant burble of idle giving way to a serrated howl as the V8 climbs to its red line.

Mighty motors to some extent dominate the driving experience in both the M3 and C63, and despite their different styles they deliver an equally addictive hit of pleasure. Just as it should be for the modern-day hot rod. The big difference is that the talent doesn’t run out at the end of the quarter mile. In fact, the real qualities that separate these cars demand anything but a straight road.

Equipped with the optional Performance Pack (£3200), which adds composite front stoppers, 10 per cent stiffer springs and, most notably, a locking rear differential, the C63’s chassis feels a little firmer, a little more responsive than it does without it. The AMG is hugely grippy, corners quickly and confidently and feels very stable. Its steering is satisfyingly meaty and usefully communicative. And, so long as you keep the traction and stability aids switched on, it isn’t overwhelmed by the available performance. It’s a chassis you can lean on, a chassis you can trust. But having said all that, by comparison with the M3’s it seems a tad stodgy and dull-witted.

True, the BMW doesn’t have as much steering weight and feel as the Mercedes, but the whole car immediately seems lighter (which it is), crisper and more alert. The BMW has the more consistently comfortable ride, too. Differences between the two cars aren’t dramatic but they are significant. The Merc feels blunter-edged and more aloof – tuned to behave optimally when the traction and stability electronics are doing their stuff rather than when the rear wheels are spinning freely.

This becomes obvious when you switch them off. With the Performance Pack’s LSD you can boot the C63’s tail a mile out of line on a tight bend while still generating tremendous drive, but it doesn’t feel as natural or progressive as doing the same thing in the M3 with its M differential deployed. If you’ve got a good imagination, faint echoes of the original (E30) M3’s accurately adjustable cornering balance can be detected in the E90, but calling the angles with the tail somehow seems a bit gratuitous and pointless. That said, the M3’s body control is so remarkably flab-free, it’s sometimes hard not to indulge.

And it’s here that some clear blue water between the cars begins to appear. Although the C63’s chassis has rock-solid resolve and feels totally unflappable, it doesn’t encourage you to grab it by the scruff and fling it around. The M3 feels more lithe, more compact and economical of movement than the Mercedes. Its helm is crisper, with turn-in swifter and more precise. The harder the road, the more enjoyable the M3 becomes. So reliable are its responses, so progressive its manners, so finely meshed the interaction between helm and throttle that you just want to play. Good as the C63 is, it feels like the bigger, weightier car. It will live with the M3 on a challenging road but it requires maximum effort and generates little joy.

Formidably potent stoppers are a shared virtue, but the better pedal feel (firm, light and progressive) belongs to the M3. The Merc’s pedal is slightly heavier but suffers from some dead travel at the top of the action.

With both cars parked up at the end of the day, the C63’s elaborate spoilers, sill extensions and front bumper slats look somewhat contrived, even if they’re not. The butch overall effect at least makes an eye-catching foil to the BMW’s almost coldly calculated stealthiness. In addition, the Merc’s cabin is a touch bigger in most directions, especially in the back where there’s both more leg- and headroom. The front seats are brilliant too, offering even stouter lateral location than the BMW’s, which we had thought were just about unbeatable in this respect. The Merc takes the laurels for the best driving position, sexiest steering wheel and clearest instruments, too.

Indeed, both cars successfully balance hardcore horsepower with a tasteful palette of home comforts. As modern Teutonic interpretations of the classic American muscle car, they make the case. If what you crave in your four-door saloon, for instance, is colossal performance delivered with the demeanour of an insouciant dragster, the C63 is almost certainly what you’re looking for.

The depth of the M3’s talent, however, is telling. For point-to-point pace it easily matches the Merc but, more than that, it feels special doing it – accurate, agile, finely balanced, biddable – where the Merc is merely accomplished. In short, the M3 saloon is sharper, cuts deeper and will keep you hooked for longer.