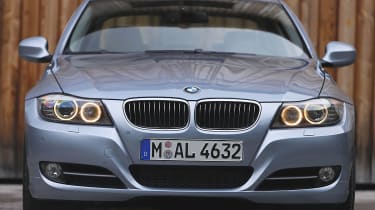 Most notable aspects of the newly facelifted BMW 3-series? You still can’t have a 323d and the best bit of Efficient Dynamics (the stop-start function) is still missing from the six-cylinder cars. There are reasons for both these omissions – in fact we’ve been given five in total, none of which are wholly convincing.

That’s what’s been left out, so what has been added in? Well, somewhere north of 2,500 changes according to BMW. Who counted? And does the styling qualify as one change, or does each altered line add to the tally? Aside from the bonnet creases and light clusters it’s hard to put a finger on the exact visual modifications, but what matters is that the bodywork now looks a touch neater and sharper, if still neither as bold nor interesting as a C-class.

The fact the press pack takes the trouble to mention that the door armrests have been repositioned gives you a good idea of how minor the interior changes are, but at least the iDrive system has been given a fundamental overhaul. Finally works as it ought to. Big 8.8-inch screen, more buttons, great graphics, logical menus – and, if you so choose, the internet in your car, if not while its on the move.

We’re driving a 335i. It’s an engine we’re very familiar with so it should help us spot any changes in the suspension set-up. Straddling the Germany-Austria border, the roads are so well surfaced you can easily see why BMW can’t see the issues with run-flat tyres. Only occasional surface changes and lateral joints puncture the air of imperious composure. The 335 is rock steady, perhaps exhibiting a fraction less body movement and superior stability than before thanks to the increased track width (up 6mm at the front and a more significant 24mm at the rear). Approach the edge of adhesion and it’s confidence inspiring despite steering that’s not as meticulous about feedback as it could be.

The twin-turbo 3-litre petrol engine remains a belter. In the saloon it may not yet be available with the DCT double-clutch system that’ll be an option on the 335i Coupe and Convertible, but it works particularly well with the six-speed auto ’box. The torque converter locks up almost instantly and it spears richly, creamily and seamlessly to the 7000rpm red line. Tingly engine note, rapid shifts and two perfectly judged pedals make it a fine, fine package.

Just to put you fully in the picture, these tweaks will also benefit the Touring, but the M3 saloon won’t be touched, while neither the Coupe nor Convertible will be updated for at least another year. This is a steady update: nothing to rock the boat, and if you weren’t already a fan of the 3-series, nothing to make you change your mind now.