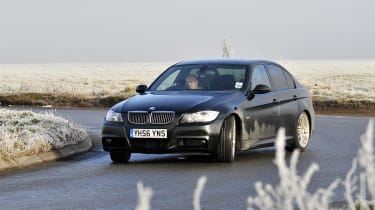 When the 335i was launched, the question on everyone’s lips was how tuneable the twin-turbo straight-six would be. And it’s a question that has remained unanswered for some time, because in an attempt to prevent tuners making the 335i faster than the M3, BMW encrypted the processor to a level that would have foxed Alan Turing.

DMS is one of a handful of firms to have finally broken down the electronic barriers, and the men in Munich will no doubt be relieved to hear that its 378bhp (up 76bhp) 335i still isn’t quite as fast as the 414bhp M3. Well, not at the test track anyway.

But in the real world, it just might be. It produces over 350bhp from 4300rpm to the limiter – a level the M3 only attains after 6200rpm – while the instant, lag-free response and ultra-smooth delivery haven’t been lost. Traction is an issue at low speeds, but the chassis and gearbox appear untroubled by the faintly uncomfortable forces now being inflicted on them.