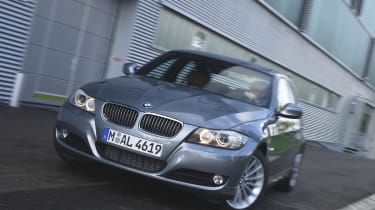 Electronic rather than mechanical upgrades are at the heart of the 3-series facelift, but there’s one engine that has been subjected to a good going-over – the 3-litre diesel.

The straight-six unit retains the same swept volume, but the iron block has given way to all-aluminium construction (saving 5kg overall), and the latest, third-generation common-rail system has been adopted. These, together with myriad minor alterations, have boosted power and torque by 13bhp and 15lb ft respectively, while stretching 49.6 miles from a gallon of fuel.

Thumb the starter button and although it’s still not as polite initially as, say, a Jaguar XF 2.7D – the gearlever shudders noticeably, for instance – once on the move the 330d is in a different league. Torque arrives quite suddenly at 1500rpm, but from there on the delivery is as progressive as you could hope for, the needle zipping round to 5400rpm keenly and without a hint of complaint. It even delivers an interestingly growly soundtrack.

In fact, the only downside is the steering. While the 335i we drove featured mechanical assistance, here it’s electrical (aids CO2 and economy, you understand) and way too light. The manual gearshift is a touch crude compared to the auto, too.

This is the first place the new engine has been used (next up is the 730d) and so far there’s no sign of a revised 335d. The 330d is so good that it’s not being missed.