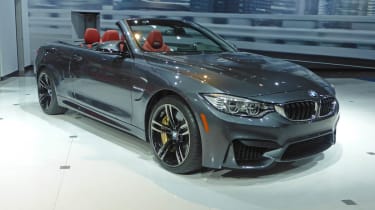 The new BMW M4 Convertible has been unveiled at the 2014 New York motor show. The drop-top M4 will join the new M3 saloon and M4 coupe, with an M4 Gran Coupe almost certain to follow.

Powered by the same 423bhp, 369lb ft 3-litre straight-six turbo as its stablemates, it’s more powerful than the V8-powered M3 Convertible it replaces. It’s 60kg lighter, too, though given how bulky the old car was that’s not as exciting as it may seem – the M4 cabrio still weighs 1750kg, over 250kg more than the coupe.

Despite this, a quoted 4.4sec 0-60 time is just 0.3sec behind its closed-roof cousin, while an electronically limited 155mph top speed is identical. A six-speed manual gearbox is standard, with BMW’s seven-speed twin-clutch paddleshift transmission a £2645 option. The latter yields the M4 Convertible’s best economy figures, a combined 32.5mpg and 203g/km CO2 emissions.

As with the M3 and M4, there’s an electronically controlled limited-slip differential plus Adaptive M suspension, which along with the electromechanical power steering, is adjustable between Comfort, Sport and Sport+ modes.

Things specific to the Convertible all revolve around its open-top character. The roof is a three-part folding metal setup, which operates in 20 seconds, while there’s a neck warming ‘Air Collar’ (surely inspired by Merc’s Air Scarf) on the options list, though this is limited to the front pair of the M4’s four seats. BMW quotes more luggage capacity than its M3 forebear, with up to 370 litres available when the roof is up. Standard equipment on UK cars includes parking sensors, heated front seats, Adaptive M Suspension and 19in alloy wheels.

The M4 has starred on BMW's New York show stand alongside the i8 and new X4 SUV as well as its M3 and M4 siblings, each displayed in new, more subtle colours than the blue and yellow that have so far been their respective signatures. The M3 saloon looked especially good in silver 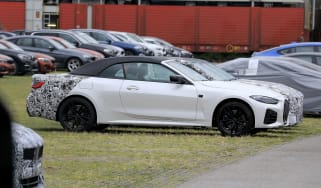