BMW has launched its most powerful road car ever, to celebrate 30 years of the M5. Pictures and details of the Anniversary model here 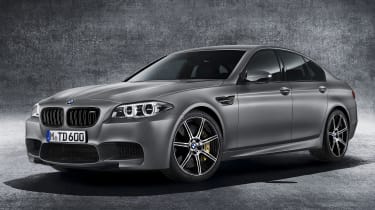 BMW has announced a new special edition M5, the 30 Jahre M5, to celebrate the 30th anniversary of the super saloon. With an additional 40bhp over the standard M5, and 25bhp over the Competition package, the 592bhp model is not only the most powerful M5 ever, but BMW’s most potent road car to date.

The M5 30th Anniversary gets an uprated version of the standard car’s 4.4-litre V8 engine, which has been given a different ECU map, as well as increased boost pressure from the turbos. The seven-speed dual-clutch transmission remains unchanged, with a software tweak for improved shift times.

Performance is significantly improved, with 0-62mph coming up in just 3.9secs, and with the optional M Drivers Package, it will hit a ‘limited’ 189.5mph. Most of the spec is carried over from the Competition Package, which includes lowered ride height, firmer dampers and revised spring rates – along with a set of forged 20-inch alloy wheels. There’s an ‘Active M Differential’ too, which along with re-calibrated stability control is said to aid traction.

Unique features include subtle 30th anniversary badging on the kickplates and dashboard. Just 300 examples will be produced, all of which will be painted in the Frozen Dark Silver paint job, although prices and availability of cars in the UK have not been confirmed.