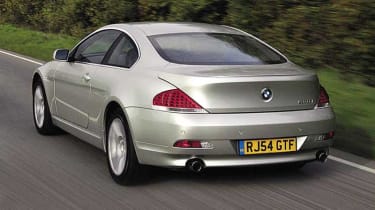 So, this is it then, the new BMW 630i, launchpad for the lightest six-cylinder engine in the world. Probably. In fact, when pushed, BMW bosses admitted they didn't actually know the weight of Mazda's baby 1.8-litre V6 from the MX-3 of the early '90s (the smallest six-pot I could think of at the time of asking) but they're still mighty proud that their new 258bhp 3-litre engine, fully dressed, stops the scales at a mere 130kg. Compare that with the single-cam, all-aluminum Rover V8 (RIP), which also had a reputation for lightness and which produced similar power, yet weighed in at 230kg. This impressively low weight is down to extensive use of magnesium alloy composite - the block and cylinder head are made of the magical stuff, as is the engine bedplate that sits below the block and adds additional strength to the whole structure. The obsessive weight-saving continues with thin-walled exhaust manifolds and the world's first electric water pump, which does away with the need for an additional fan belt to drive it. All of which helps to make the new 630i an impressive 130kg lighter than the 645i. Read further into the specification, though, and you realise that not all the weight saving can be attributed to the bantamweight engine up front. For a start, all four brake discs are smaller, the battery hiding in the boot has shrunk and the standard wheels and tyres have quietly lost an inch in diameter and width. Still, a 130kg weight saving should do no harm at all to the 6-series' dynamics. Out on the Spanish roads, the new engine feels decisively torquier than the old 3-litre unit, even though the peak figure has remained the same, so the gutsier feel from 1500rpm onwards must be thanks to all the clever new Valvetronic technology. This system does away with the throttles and uses variable valve lift instead, which helps the engine breathe better at lower revs. There's excellent thrust on offer right through the torque peak and on to the new 7000rpm redline (up from 6500rpm previously) so it's a real shame to have to report that there isn't any real aural stimulation along the way. BMW's history of building fantastic-sounding engines leads us to expect something special from the new six, especially given the increased power, but this one really does sound a bit monotone. Bizarrely, it sounds great from the outside but little of this filters into the cabin. What happened to the creamy snarl found in previous incarnations? No complaints about the impressive performance, though. BMW claims a 6.5sec dash to 60mph and a top speed that's meant to be limited to 155, although I'm sure we saw an indicated 160mph-plus a couple of times. Dynamically, the story gets a little fuzzier - the depth of the 6-series driving experience always depends heavily on the spec of the test car. Take Active Steering, for example. The more I use it, the less I think it's a good idea, as it introduces a further layer of interference between the driver and any steering feel that might be on offer. Even six months into my long-term 645 I'm still caught by the sudden changes to the steering response. It seems a system more suited to city driving and it's interesting to note that it won't be an option on the M5 or M6. BMW admits it is re-evaluating the gearing of the variable steering so there won't be such a massive difference between the gearing at parking speeds and motorway speeds in the future. Our test 630i is fitted with the excellent Dynamic Drive (active anti-roll bars that reduce roll by 80 per cent at 0.6g cornering) so turn-in is marginally sharper than in the 645i. But the ride seems to suffer from the reduced kerb weight, thanks to BMW's insistence on fitting sports suspension and run-flat tyres as standard on all UK 6-series. The biggest beef I have is with the price. BMW is asking £45,255 for the standard 630i, compared with £50,450 for the 645i. The price gap between the 530i and the 545i is a more realistic £10,000, making the smaller-engined car a proper value choice. But here the 645i offers far better value - it's a fabulous engine, offers a subtle V8 grumble, is massively faster, and the chassis dynamics are as near as dammit the same. With the 630i on the scene, the 645i suddenly starts to look like some sort of bargain. And, whichever way you look at it, that was undoubtedly not what BMW had in mind.