BMW reveals the coupe version of its new 6-series. News and pictures of the Jaguar XK rival here 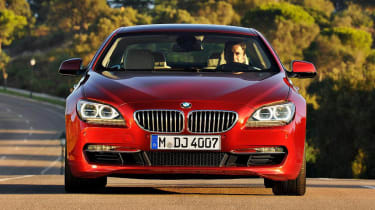 BMW has revealed its new 6-series coupe. The hard-top two-door is unusually being launched after the convertible variant, which we have driven here. Like its soft-top sibling, the coupe will launch with two engines, a 316bhp 3.0-litre straight-six (in the 640i) and a 401bhp 4.4-litre V8 (in the 650i). Both are petrol powered, but expect a diesel to replace the outgoing 635d, which was something of a revolutionary benchmark for diesel sports coupes. We can also expect a new M6, which like the new M5, will gain a new twin-turbocharged V8 engine with around 570bhp. Our first review of the new BMW M5 shows we’ve much to look forward to. The new BMW 6-series coupe will be revealed at the 2011 Shanghai motor show in April. Expect prices to begin at a smidge over £60,000 for a 640i when UK sales begin in September. Click the pictures to enlarge them or the links below for more content… New BMW 6-series convertible review All-new BMW M5 sports saloon review BMW M6 v Audi R8 v Aston V8 v Porsche 911