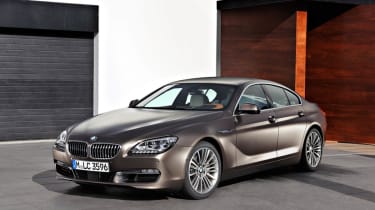 BMW has released details of its new four-door 6-series Gran Coupe. It’s another niche-filling offering from Munich, and BMW’s answer to the growing market of sporting four-door coupes.

It will compete with Audi’s handsome A7, VW’s recently updated CC and the market instigator – Mercedes-Benz’s CLS. It’s the production version of BMW’s 2010 Gran Coupe concept, itself inspired by the 2007 CS Concept which kicked off BMW’s sleek four-door development. BMW has neatly worked two extra openings into the regular 6-series’ sleek styling. The Gran Coupe not only takes its styling from the 6-series Coupe and Convertible, but also shares an engine range with them. Two petrols and one diesel are offered. Both the 640i and 640d are powered by a 3-litre twin-turbo straight-six, the former a 316bhp/332lb ft petrol and the latter a 309bhp/465lb ft diesel.  The flagship 650i showcases BMW’s latest development 4.4-litre twin-turbo V8, now producing 444bhp. An extra 43bhp is yielded by the introduction of Valvetronic variable valve timing – a new technology that optimises both engine response and efficiency. The 650i is available with BMW’s optional xDrive all-wheel drive system, which helps get the range topper to 62mph in 4.5sec - not bad going for a hefty grand tourer. All models are fitted with an eight-speed auto gearbox and stop/start as standard.  BMW says the Gran Coupe is a 4+1 seater (compared to the 2+2 Coupe), meaning that it will comfortably seat four people and can accommodate a fifth passenger between the rear bucket-like chairs for short journeys. The cabin is similar to the regular 6-series and is just as plush. Standard equipment includes leather seats, a hi-tech audio system and two-zone automatic climate control. As usual, most of the interesting gadgets are optional extras, a Bang & Olufsen surround sound system and four-zone climate control among the highlights. An M Sport package will be optional from launch and will add more overtly sporting exterior styling. Prices for the 6-series Gran Coupe start at £61,380 for the 640i SE, rising to £75,130 for a 650i M Sport, and you can get your hands on one from June 2012. And while unconfirmed thus far, An M6 version (powered by the new M5’s 552bhp twin turbo V8) would make a thoroughly appealing alternative to the 549bhp Mercedes CLS63 AMG and the upcoming 414bhp Audi S7…