BMW pulls the wraps off its Audi RS7 rival, the M6 Gran Coupe, at the 2013 Detroit motor show 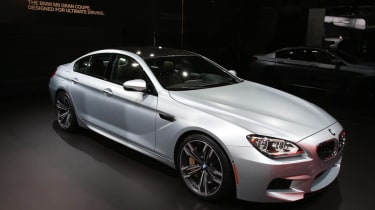 BMW's M6 Gran Coupe has made its public debut at the 2013 Detroit motor show. It’s joined at the show by the new Mercedes E63 AMG and Audi RS7 Quattro, the latter boasting an identical power output, lining up a mouth-watering group test.

The M6 Gran Coupe is a four-door version of the M6 Coupe, and uses the same 552bhp, 501lb ft 4.4-litre twin-turbo V8 petrol engine. It drives the rear wheels via a seven-speed twin-clutch gearbox.

You can already buy this transmission in a four-door, of course, the M6 being the powertrain twin with the M5 saloon. The Gran Coupe is longer and lower, though, and weighs 5kg more. Its 4.2sec 0-62mph is a smidge quicker, though, while its top speed is limited to 155mph as standard, but rises to 189mph with an optional performance package. Price is where the M5 and M6 Gran Coupe are most different, though; a brand new M5 will set you back £73,065, but this more svelte M6 is £97,490. The £24,425 difference is enough to buy a Caterham Seven Supersport and a couple of trackdays…