Audi pulls the wraps off its 552bhp RS7 Sportback at the 2013 Detroit motor show. A rival for the BMW M6 Gran Coupe and Mercedes CLS63 AMG 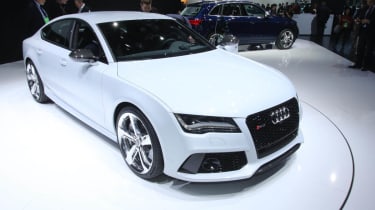 Audi has unveiled its latest RS model at the 2013 Detroit motor show. The RS7 Sportback will rival the BMW M6 Gran Coupe and Merceds CLS63 AMG.

Full 2013 Detroit motor show coverage here Heavily related to the recently revealed RS6 Avant, it packs the same punch, with a 552bhp/516lb ft 4-litre twin-turbo V8 engine. That latter figure is available from 1750rpm all the way to 5500rpm, providing the RS7 with a supercar-annihilating mid-range. Mated to Quattro all-wheel drive, it serves up a 3.9sec 0-62mph time. Not quite as quick as the new Mercedes AMG – also unveiled at Detroit – but still way brisker than many less practical sports cars. The top speed varies on how your RS7 is specified, with 155, 174 and 189mph electronic limits depending on your options packs. While the Audi S7 – with a lower tuned version of the 4-litre V8 – uses a twin-clutch S-tronic gearbox, the RS7’s stupendous torque requires a beefier eight-speed tiptronic transmission. Torque vectoring and Audi’s Sport Differential are standard, as is adaptive air suspension, though a steel sprung set-up with Dynamic Ride Control is optional. The brakes are suitably large, with 390mm discs fitted as standard up front, and 420mm carbon-ceramic items an expensive option. 20in alloy wheels are standard fit with a trio of 21in designs optional. Order books for the Audi RS7 Sportback open this summer, with deliveries beginning late in 2013. Expect to pay around £84,000 for one, around £7000 more than its practical RS6 Avant sibling yet a staggering £13,000 cheaper than its BMW M6 arch rival. Factor in the updated Mercedes CLS63 and a fantastic 1681bhp three-car group test lies in wait.