Along with the new E63, Mercedes-Benz has announced a power increase and new 'S' performance pack for the CLS 63 AMG 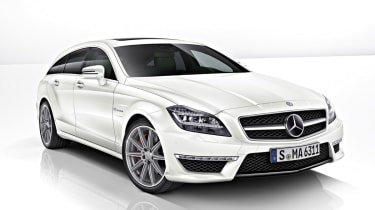 As well as the new blisteringly quick E63, Mercedes has boosted the power of the CLS 63 AMG and Shooting Brake models, as well as announced a new more-powerful ‘S’ AMG model, which comes with Mercedes’ four-wheel-drive 4Matic system in all left-hand-drive markets.

The basic 5.5-litre twin-turbo V8-powered CLS 63 now packs 550bhp and 531lb ft as standard. Previously, power started at 518bhp, only rising to 550 with the optional Performance package, although this has now been superseded by the 'S' AMG model. The power boost applies to both saloon and Shooting Brake models.

The 'S' sees the introduction of the most powerful incarnation of the CLS to date, giving the four-door coupe 577bhp through an engine remap. This power increase comes in conjunctions with a new and more performance orientated version of Mercedes' four-wheel-drive 4Matic transmission. This has been confirmed in mainland Europe and the US, but because 4Matic isn't an option in the UK, it's likely (but so far unconfirmed) that we will get a rear-wheel drive version of the 'S'.

Performance figures for the CLS AMG have as a result of the update improved across the board. All models are still limited to 155mph, but 0-62mph times have significantly improved. The standard model sheds two-tenths of a second at 4.2 seconds, but the real headline-grabbing figure comes from the S-Model. With the assistance of the four-wheel-drive transmission and extra power, the 'S' manages to eclipse that figure, with a 0-62mph time of 3.6secs.

UK prices and launch date have yet to be set, although the updated models are set to go on sale in Germany in April, with the 4Matic and S models coming later in June.